(Switzerland) - Golf enthusiasts will find themselves on top of the world thanks to the ‘Golf Break’ package being offered by the iconic Kulm Hotel St. Moritz (www.kulm.com) to guests staying two nights or more in the Swiss Engadine Valley this summer. 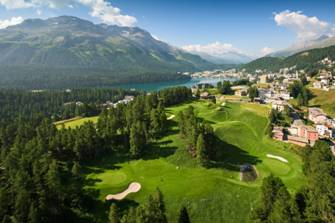 In addition to unlimited access to the par 27 Kulm Golf St. Moritz, the package includes one complimentary green fee at either the parkland, links-style layout at Samedan or its sister course at Zuoz, which weaves its way along the majestic mountainside and in between pine forests; both these 18-hole courses are under half an hour’s drive from the Kulm Hotel.

The Engadine Valley has a reputation as a golfer’s paradise due to the spectacular Alpine panoramas of fertile green valleys and dramatic mountain backdrops set against deep blue summer skies.

Over 125 years ago, in 1891, the Kulm Golf St. Moritz, nestled among pines on the high Alps with stunning vistas over Lake St. Moritz, became the first 9-hole course in Switzerland. A course upgrade in 2001 by local designer, Mario Verdieri, improved the greens and brought the layout up to date. The mountainous nature of this course makes it physically challenging, but refreshment is close at hand, as the hotel’s Chesa al Parc restaurant is located in the grounds only a few metres from the start of the course.

Two years later, Samedan became the first 18-hole golf course in Switzerland to open its doors and this year celebrates its 125th anniversary. A classic, parkland course with a touch of links, Samedan is set mainly on the valley floor, though the course does offer some gently undulating holes. It is characterized by broad fairways flanked by ancient, giant larch trees, some of which are over 700 years old, whilst numerous water hazards made up of a series of ponds and streams ensure it is a testing challenge of golf. Samedan is just a 10-minute drive from the Kulm Hotel St. Moritz. 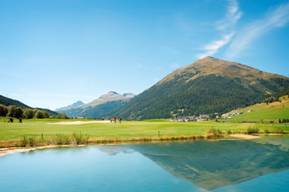 In 2003, these two courses were joined by the Zuoz-Madulain course – or simply Zuoz – just a
20-minute drive from St. Moritz. Despite being a relatively young course, the combination of undulating fairways, multiple elevation changes, receptive greens and its attractive setting so close to nature have made it extremely popular with golfers. In contrast to the golf course in Samedan (with its level terrain and plentiful lakes and streams), Zuoz is set on a few different levels and flanked on one side by natural, thick pine forest.

Also included in the ‘Golf Break’ package are a sumptuous daily breakfast buffet and Gourmet Dine Around (half board), reduced green fees at Samedan and Zuoz for those wishing to play an extra round, a 25-minute AktiVital Massage as well as unlimited free access to the state-of-the-art, 2,000 sq m Kulm Spa St. Moritz, tennis courts and use of all the open mountain railways in the Engadin/St. Moritz region and public transportation in the valley (bus and Rhaetian railway).

To qualify for the ‘Golf Break’ offer, simply book two consecutive nights at the Kulm Hotel St. Moritz between 22 June and 1 September 2018; rates per person for two nights start from CHF670  (approx £495) in a single room and CHF640 in a double room (based on two people sharing a double/twin room). Additional nights can be booked on request and complimentary green fees are offered to all those booking for four nights or more.