(Carlsbad, Calif.) – TaylorMade Golf Company, maker of SLDR, the No. 1 driver on the PGA Tour since August 2013, has teamed up with John Brenkus*, creator of the Emmy-winning “Sport Science” series, to create the TaylorMade “Innovation” Series - a set of videos highlighting the science and technology behind TaylorMade equipment. 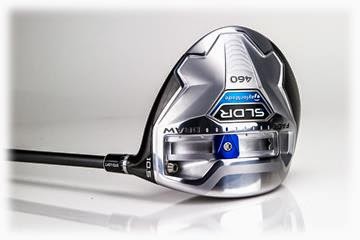 The latest installment in the “Innovation” Series shines the spotlight on TaylorMade’s SLDR driver and explains the technology that allows golfers to gain more distance when they loft up with SLDR.

Currently the No. 1 played driver model on the PGA Tour, the SLDR is engineered with a remarkable low and forward center of gravity (CG) placement which results in dramatically reduced spin rates. Because of this construction, TaylorMade is leading golfers – including PGA Tour players – to “loft up,” a message that flies in the face of what the rest of the industry has been promoting, yet a significant step in the pursuit of the perfect launch condition.

To help demonstrate the distance-producing power of SLDR, Brenkus enlisted the help of TaylorMade Tour Professional Dustin Johnson, one of the longest hitters on the PGA Tour.

In this video, Dustin uses a Trackman System to compare his distance gains with a SLDR against a back CG driver. The results are clear. Dustin achieved a 14-degree launch angle with 1,800 RPMs of backspin – just shy of the optimum 17-degree of launch and 1,700 RPM.  With the SLDR, Dustin was 20 yards longer.

The distance gains aren’t just for the world’s best players. In the video, Brenkus also “lofts” up with SLDR and decreases his backspin by 58% against a back CG driver for an average distance gain of more than 20 yards.

Brenkus, a six-time Emmy Award winner, creator of "Sport Science" and New York Times best-selling author of "The Perfection Point," demonstrated how SLDR creates more distance for amateur golfers as well as the best players in the world.

Click HERE to see Brenkus and two-time U.S. Open Champion Retief Goosen break down the power of the Speed Pocket.

* John Brenkus is a paid spokesperson of TaylorMade-adidas Golf
Posted by Blogger at 9:20 AM