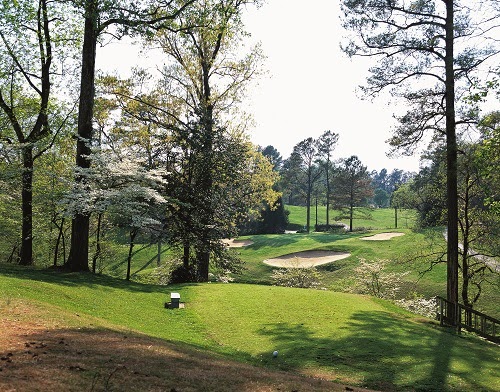 (Williamsburg, VA) - Colonial Williamsburg’s Golden Horseshoe Golf Club will celebrate another 50th anniversary when its popular executive length Spotswood Course turns golden this summer.  Designed in 1964 by Robert Trent Jones Sr., the dean of American golf course architecture, during construction of the adjacent Gold Course, the elder Jones incorporated many of the greens and tees of the Williamsburg Inn’s original nine-hole course – built in 1947 – into the Spotswood Course.

Named for Gov. Alexander Spotswood, the British governor of colonial Virginia whose daring 1716 expedition to Virginia’s frontier is the reason behind the Golden Horseshoe name, the executive course offers challenges to golfers at all skill levels and is a favorite of families looking for an entertaining, shared outdoor activity.  Fast-paced lifestyles don’t always allow time for a full round of 18, but the Spotswood provides a few embracing hours on nine beautiful holes where play can be enjoyed by junior golfers, beginners and experienced golfers alike.

Frequently serving as a warm-up for resort guests preparing to play the Gold and Green Courses, the Spotswood layout enjoys its own enthusiastic and loyal following among Golden Horseshoe Golf Club members, who often use the two sets of tees to play an 18-hole round.

According to legend, Gov. Spotswood organized his daring expedition to explore the far reaches of the Virginia colony.  Aware of the frontier’s economic potential and bent on encouraging westward settlement, he led a party of 63 men on an arduous journey across Virginia’s rocky Piedmont and Blue Ridge terrain.  The trek took a high toll on men and horses requiring great quantities of replacement horseshoes.  Upon their return, the governor presented each companion with a Golden Horseshoe, some reportedly studded with valuable stones resembling the nail heads.

The Golden Horseshoe Golf Courses epitomize the tradition and mystique of Spotswood’s expedition: the challenge of daring adventure, the enjoyment of a peaceful and spectacular environment, and the reward of completing an arduous test.  Revenue from golf play on the Golden Horseshoe Golf Club’s three public courses supports The Colonial Williamsburg Foundation, keeping this vital piece of American history alive and thriving.

For golf tee times call 800-648-6653. For reservations or package information at an official Colonial Williamsburg hotel, call 855-296-6627 or visit www.colonialwilliamsburg.com.
Posted by Blogger at 8:34 AM