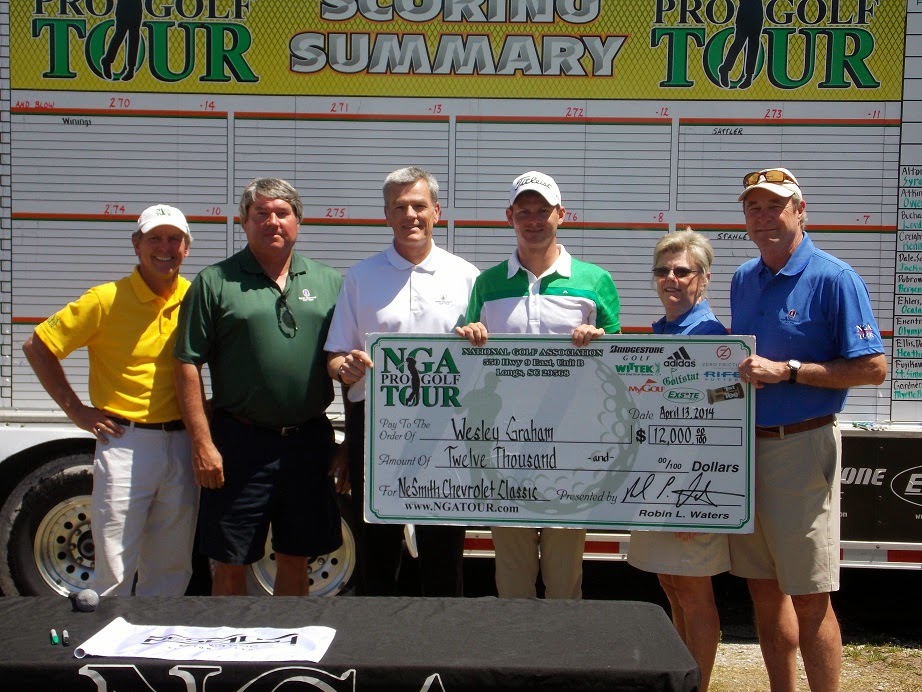 (Shellman Bluff, Ga.) – When Wesley Graham (out of Daytona Beach, Fla.) stood on the 17th tee at Sapelo Hammock during the final round of the 2014 NeSmith Chevrolet Classic he knew he had to make something happen. He stood at 13 under par for the tournament, a shot back of 2012 and 2013 Web.com Tour member Andy Winings (out of Brownsburg, Ind.), who had gotten hot during the day, shooting 6 under par and putting himself into prime position to earn his first NGA Tour Pro Series victory. However one incredible shot by Graham would change everything. 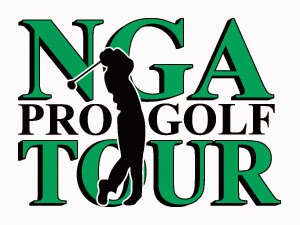 “I knew I had to play the last 3 holes good,” exclaimed Graham after checking out the leader board on 15 and noticing he was a shot down to Winings, “He is a great player and I knew I needed to shoot under par the last three.”

All it took was one shot, an 8 iron on the par 3 17th, which got him to where he needed to be and propel Graham to his first NGA Tour Pro Series win.

Graham could barely contain his excitement as he explained “I parred 16 so I knew the last two holes were pretty important and I hit an incredible 8 iron on 17 that went right in and I screamed and freaked out.”

He would then par 18 for the win leaving the former Kentucky Wildcat star Winings to settle for runner-up. Graham earned a first place prize check worth $12,000 for the win while Winings received $5,800 for runner-up. This is sure to be another stepping stone on the path to a great professional career for Graham, once the top ranked junior golfer in the world. Graham had previously won his second start as a professional in 2012 as part of the NGA Tour Carolina Series after losing in a playoff the previous week in his professional debut.

Third round leader Brian Richey (out of Lakeland, Fla.) finished tied for third after a final round one over par set him back. The Florida Southern alum, who was in the final pairing with Graham, finished tied with Akron alum Blake Sattler (out of New Philadelphia, Ohio), who had matched Richey on Saturday for the low round of the tournament 65 to put himself into contention. The former Zip shot a final round 69 to finish at 11 under and just four shots back of Graham. 2012 NGA Tour co-Rookie of the Year and LSU alum Ken Looper (out of Mandeville, La.) finished at -10 and tied for 5th with local prospect Christopher Johnson out of Brunswick. Altogether only twelve players were able to finish under par at the challenging Sapelo Hammock track.

The NGA Tour would like to thank our title sponsor, NeSmith Chevrolet, the staff and volunteers at Sapelo Hammock, and the town of Shellman Bluff, Georgia for putting on a great event and making a home for the NGA Tour in southeast Georgia. The NGA Tour picks back up April 21st for the first leg of the tour’s popular “Lake” Run that includes the Mountain Lakes Classic at Cross Creek Plantation in Seneca (April 21-27), the Savannah Lakes Village Classic at Monticello in McCormick, S.C. (April 28-May 4), and the Kandy Waters Memorial Classic at Gordon Lakes in Fort Gordon/Augusta, Ga. (May 5-11).

To learn more about the NGATour or the National Golf Association visit www.ngatour.com or call 800-992-8748.