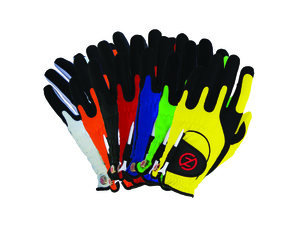 Emerging as one of golf's most popular grass-roots competitions, the new partnership between Zero Friction and the WLDA coincides with the heart of the Long Drive season, which includes the "Clash in the Canyon" in June, the first of three television events set to air on Golf Channel in 2017.

"I am thrilled to have our brand associated with World Long Drive, and to have an amazing opportunity to introduce our gloves and tees to the Long Drive community, both on-site at events throughout the season and to those following along on Golf Channel," said Zero Friction President John Iacono.

Zero Friction first entered the glove market in 2014 with its one-size-fits-all compression fit golf glove which allows for greater feel, comfort and shot accuracy. Hall of Famer Johnny Miller was so impressed when introduced to Zero Friction in 2015 that he took a stake in the company and helped designed the Johnny Miller Motion-Fit Glove.

Last year, Zero Friction unveiled its new DistancePro GPS Glove, the first wearable GPS technology on a golf glove. Powered by Bluetooth, the device sits comfortably on the glove flap and weighs less than half an ounce.

Zero Friction has retained the 5th position in market share for golf gloves with both on course and off course retailers in the U.S. for the past two years.