Daly’s win, the first professional victory for Vertical Groove Golf since the Company’s innovative driver debuted in late 2016, was complemented by the Insperity Invitational’s runner-up, as well as Vertical Groove Golf staff member, Rocco Mediate, and two other PGA TOUR Champions’ players using the driver in the event. The victory also marked Daly’s first win on the PGA TOUR Champions, while Mediate led the field in driving accuracy at more than 90 percent. 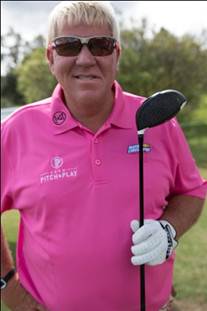 "These finishing holes are so hard," said Daly. "I didn’t hit the irons very good these last two days. I drove the ball tremendously with my Vertical Groove driver. And I putted so good. I just kind of hung in there and did the best I could. It wasn’t pretty at the end, but I got it done. That’s all that matters.”

“We’re extremely proud of John Daly’s victory this past weekend using the Vertical Groove Driver,” said Rubin Hanan, Managing Partner/Chief Operating Officer, Vertical Groove Golf.  “There is no one better suited to showcase the distance and accuracy attributes of the driver than John, and his performance this weekend certainly validated the features and benefits of our new golf club innovation.”

The cutting edge Vertical Groove Driver, which conforms to the Rules of Golf, is designed to reduce spin at impact, forcing tighter dispersion and leading to, on average, up to 40 percent straighter ball flight and up to 10 yards further in driving distance. Now, some of the best players on the PGA TOUR Champions are recognizing the results in competition.

Adds Hanan “To have five players using our product in competition on tour, just a few months after launch, is amazing. But, this is just the beginning, as we have more than a dozen players testing the driver on the PGA Tour Champions. John’s win will certainly help encourage other players to try this product, as we remain focused on becoming the No. 1 driver on this tour.”

The 450cc Vertical Groove Driver, which is available in both right and left handed models, is offered in 8, 9.5, 10.5 and 12 degree lofts (right) and 9.5 and 10.5 degree lofts (left), while featuring a full range of Aldila premium grade, tour-proven aftermarket NV2K series shafts as standard.  The available flexes include: 45 gram L (Ladies), 50 gram A (Senior), 55 gram R (Regular), 65 gram S (Stiff) and 65 gram X (Extra-stiff).   At a length of 45.5 inches, the Vertical Groove Driver provides an optimum launch angle while maximizing carry distance and ball speed for many players. It is equipped with Golf Pride Tour Velvet grips in standard, midsize and oversize models.  Alternative shaft options from Fujikura, Mitsubishi and Aldila also will be available. Suggested retail price of the Vertical Groove Driver is $399.99.