(RALEIGH, NC) — McConnell Golf President and CEO John McConnell of Raleigh was inducted into the North Carolina Entrepreneur Hall of Fame on May 16 as part of the second annual Council for Entrepreneurial Development (CED) Founders Day celebration. 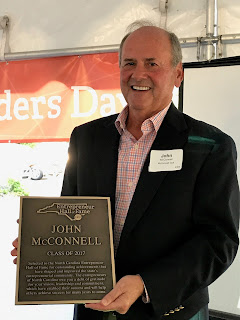 McConnell was part of the second class of Hall of Fame inductees and joined Mitch Mumma of Durham, the Managing Partner of Intersouth Partners. Eight leaders among North Carolina’s investor, entrepreneur and service provider communities comprised the selection committee. The committee considered more than three-dozen candidates for the 2017 class. Inductees needed to receive more than 80 percent of the committee’s votes.

“The members of the 2017 North Carolina Entrepreneur Hall of Fame class are standout examples of the high quality entrepreneurs who have grown their businesses in North Carolina,” said Ravila Gupta, CED President & CEO. “We honor them for their leadership, vision and commitment to the community, and thank them for their roles in building the entrepreneurial ecosystem we all benefit from today.”

In 1982, McConnell co-founded Medic Computer Systems Inc., a Raleigh-based healthcare information management systems firm, where he served as Chief Executive Officer for 16 years. McConnell led Medic through its public offering in 1992, along with its sale five years later for $922.8 million — a record price for a Triangle company.

McConnell received the North Carolina High Technology Entrepreneur of the Year Award in 1994. Two years later, CEO Magazine named him one of the country’s Top 100 CEO’s. In December 1998, he became CEO and Chairman of A4 Health Systems, a Raleigh-based provider of Electronic Medical Record solutions that he sold in 2006 for $272 million.

Since 2003 he has served as CEO and Founder of McConnell Golf, LLC, which owns a dozen 18-hole, private golf courses plus one nine-hole course throughout the Carolinas and Tennessee. McConnell Golf is a privately held company offering unlimited access to world-class facilities and golf courses designed by legends Donald Ross, Pete Dye, Tom Fazio, Arnold Palmer, Greg Norman, and Hale Irwin.
Posted by Blogger at 11:18 AM