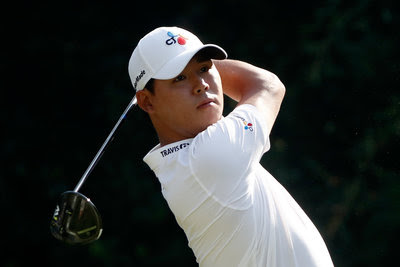 (RELEASE) - Si Woo Kim plays a bag filled with '17 M1 metalwoods (M1, M1 & M1), P770 & 750 irons and TP5x, the TOUR's only 5-layer ball, and the same ball available at retailers worldwide
What You Need To Know:
- Kim's victory is the 17th in 20 weeks on global tours for TaylorMade's new '17 drivers, far outpacing the next closest manufacturer.
- With 62 in play (42.8%), TaylorMade again dominated the driver count at THE PLAYERS.
- Kim plays the all-new '17 M1 460 driver, which he first put into play at the Tournament of Champions in January. He has it shafted with a MRC Tensei Blue TX, his normal go-to setup this season. Off the tee, he averaged 306 yards this weekend, more than 10 yards higher than the field average.
- Kim plays a combination set of the P750 & P770 irons, opting for the 3-4 in the P770 & 5-9 in the P750. Both are equipped with KBS Tour-V 125 shafts. He's had this setup since the Waste Management Open in February.
- Including Kim, 5 of the top 10 finishers gamed TaylorMade drivers at the tournament.
- Kim is the youngest-ever winner of THE PLAYERS.
- This was the sixth win this season on the PGA TOUR for the new TP5/TP5X ball and 8th global victory, with Kim joining Sergio Garcia, Dustin Johnson and Jon Rahm, among others, who've won with TaylorMade's new golf ball. He first put the ball into play at the Tournament of Champions.

Also of note, while not in the bag of Kim, Spider was once again the No.1 putter model this week, continuing its trend as the hottest putter on Tour.
Posted by Blogger at 9:58 AM