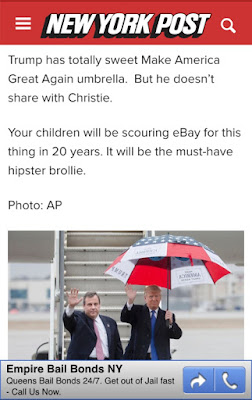 You guessed it ... that umbrella was made for Mr. Trump by none other than GustBuster Umbrellas!

"Donald Trump has been a customer of ours for a very long time," said Steve Asman, President of GustBuster Umbrellas. "We've been making umbrellas with the TRUMP corporate logo on them for several years now. He carries one himself and they're also used by the doormen and employees of his properties worldwide. The TRUMP name has always been associated with Quality and Luxury and we're proud to provide him with these Make America Great Again umbrellas as he pursues his next endeavor to become the Leader of the Greatest Nation on Earth. Whether you agree or disagree with his policies and his platform you have to admit one thing ... he knows a great umbrella when he sees one."

How is it that a product that has been around for almost 15 years is featured again and again on TV Shows like Fox & Friends, The CBS Early Show, The NBC Today Show, The Weather Channel, CNN, and Good Morning America and in newspapers like The New York Post and the New York Times? It's because NO ONE has been able to make a better umbrella...that's why!

The Donald Trump photo (photo credit: Associated Press) holding his trusty GustBuster Umbrella can be viewed by clicking on this link: http://nypost.com/2016/03/01/super-tuesday-2016-real-time-coverage-of-the-presidential-primaries/#liveblog-entry-31082

GustBuster's patented wind-release vents and flow-through design can withstand winds of more than 55 M.P.H. making it the ultimate wind umbrella. It's the only UN-Flippable, UN-Flappable, UN-Leakable umbrella in the world. The joints and ferrule of the GustBuster are constructed of a combination of Ultra High-Density Poly-Carbonate, Carbonized Steel and Aluminum and won't break or turn inside-out. The GustBuster umbrella uses nylon that is a strong 190 thread per inch blend that won't tear, which is why it's backed by the manufacturer with a lifetime repair or replacement warranty. GustBuster has revolutionized the way we look at and design umbrellas. It's the World's Smartest Umbrella because of its superior technology.

For more information on GustBuster Umbrellas call (888) GUSTBUSTER or visit www.GustBuster.com.
Posted by Blogger at 12:24 PM