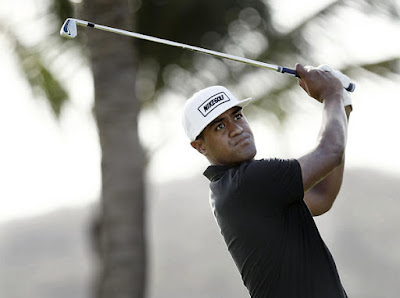 At the Puerto Rico Open, Finau clinched his first PGA Tour title after sinking a three-foot putt for birdie with his Nike Method Converge S2-12 putter

(RELEASE) - Nike athlete Tony Finau, who joined Nike this past January, claimed a monumental victory on Sunday with his new Nike equipment.

At the Puerto Rico Open, Finau clinched his first PGA Tour title on the third playoff hole after sinking a three-foot putt for birdie with his Nike Method Converge S2-12 putter. In the windy conditions at Coco Beach, the 26-year-old power hitter ranked fourth in driving distance averaging 302-yard drives with the combination of his Nike Vapor Fly driver and Nike RZN Tour Black ball. So far in 2016, Finau is averaging seven more yards in driving distance compared to his 2015 season and is currently ranked first on the PGA Tour.

"I haven’t driven the ball better in my career than I have this year," confirms Finau. “I like a firmer cover on my golf ball, so the RZN Tour Black turned out to be the perfect ball for me. It’s the best ball I’ve ever played.”