New Era for the Kingdom at Reynolds Lake Oconee 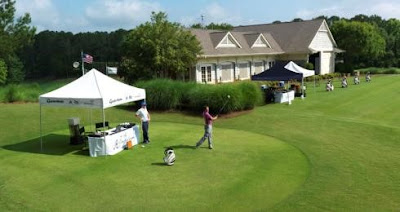 (GREENSBORO, Ga.) — Integrating superior equipment technology with innovative golf instruction, The Reynolds Kingdom of Golf, presented by TaylorMade, has been transformed into the premier full-game improvement experience in golf and will now be operated by Reynolds Lake Oconee.

Reynolds has continued their exclusive partnership with TaylorMade as the presenting sponsor of the Kingdom of Golf. With this sponsorship, all guests will continue to have access to the TaylorMade MATT-T system and instant gratification through the building of clubs in the onsite TaylorMade Tour Trailer.

Furthermore, the Reynolds Golf Academy, under the direction of Top 100 instructor Charlie King, has been fully integrated into The Reynolds Kingdom of Golf to provide golfers with a total golf experience.

“Game improvement is a cornerstone of the Reynolds lifestyle,” said Mark Lammi, Vice President of Golf Operations for Reynolds Lake Oconee, which has assumed ownership and operation of The Kingdom. “By extending our long-time partnership with TaylorMade and  adding in the world class instruction of Charlie King’s team, we will have one of the most premier game-improvement centers in the country.

“Taking over the ownership and operations of these platforms means we will be able to continue to offer the existing world-class services of each business, while also allowing us to focus on our current initiatives, which include more access for our resort guests and an increase in our junior and family development programs.”

In addition to incorporating these independent businesses into the Reynolds Lake Oconee golf operations, a major expansion of the current Kingdom facility is underway. This expansion includes two fully enclosed hitting bays, three covered and heated hitting areas, TrackMan 4 launch monitors, and high-speed Ximea cameras. This is another example of the $40 million investment in ongoing renovations at Reynolds Lake Oconee.

Since opening in 2007, The Kingdom has served as the East Coast fitting center for many PGA and LPGA Tour stars.  It is the only TaylorMade venue in the country where recreational golfers can be fit for equipment in the same elite environment used by  Tour players and club professionals on staff with TaylorMade.

Located between Atlanta and Augusta, Reynolds Lake Oconee already ranked among the most exciting golf experiences in the country with six award-winning golf courses designed by legendary architects Jack Nicklaus, Tom Fazio, Rees Jones, Bob Cupp, and Jim Engh. With the launching of the Reynolds Kingdom of Golf, it is now also one of the most complete golf experiences as well.

Since MetLife’s initial investment in August 2012, five of the six golf courses have undergone substantial investment and improvements, including Plantation Course, which reopens this spring following a renovation. Additionally, a golf village was built at the National course, and dining areas in the Great Waters clubhouse were renovated. The rooms, cottages, restaurants, spa, and pools of The Ritz-Carlton Reynolds, Lake Oconee have been redecorated and refurbished.