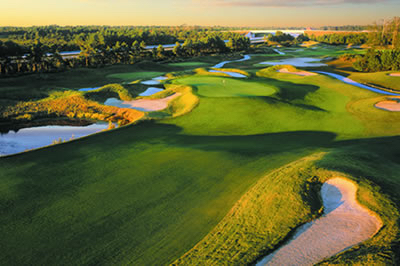 
Ten of the top 15 public courses in the Palmetto State reside along the Grand Strand, according to Golfweek, led by the venerable Dunes Golf & Beach Club, which checked in at No. 3, and fifth-ranked Caledonia. While the area’s consensus top 100 layouts led the charge, they were immediately followed by True Blue Golf Club (No. 6), Tidewater Golf Club (No. 7), King’s North at Myrtle Beach National (No. 10), TPC Myrtle Beach (No. 11), Moorland at Legends Resort (No. 12), Dye Course at Barefoot Resort (No. 13), Heritage Club (No. 14) and Grande Dunes Golf Club (No. 15).

Golfweek’s rankings were further affirmation of the quality and depth of Myrtle Beach’s offerings. In 2015, Golf.com surveyed more than 6,000 readers, and the Grand Strand was voted the game’s best overall destination, best for buddies trips and best for value.

“Myrtle Beach is home to more outstanding courses than any destination in the world, and Golfweek’s rankings reinforce that fact,” said Bill Golden, president of Myrtle Beach Golf Holiday. “South Carolina is America’s premier state for golf, and the fact that 10 of its 15 best public courses are located along the Grand Strand is a testament to Myrtle Beach’s unmatched quality.”

The Dunes Club is Myrtle Beach’s most revered course. The Robert Trent Jones Sr., design is a consensus top 100 layout and has hosted six Senior PGA Tour Championships and the U.S. Women’s Open, among many other prestigious events.

True Blue, the only Myrtle Beach course to have GolfBoards, is another Strantz gem. Everything about the course is big, particularly its gargantuan fairways, which are often framed by waste bunkers to help create stunning visuals and one of the nation’s mostly high regarded layouts.

Tidewater Golf Club is arguably the area’s most scenic layout with eight holes playing along the Intracoastal Waterway or Cherry Grove Inlet. The third and 12th holes might be the best pair of par 3s on the East Coast, and the par 5th 13, which offers a view of the Atlantic Ocean, upstages both.

King’s North at Myrtle Beach National is an Arnold Palmer design that captivates with its creativity, highlighted the par 5 sixth hole, otherwise known as “The Gambler.” The alternate, island green fairway gives players a chance to go for the green in two and is one of many risk-reward decisions the course encourages.

TPC Myrtle Beach, which has hosted the Senior PGA Tour Championship, is one of fewer than 20 courses in the nation that earned 5 stars from Golf Digest and a premier golf experience from the bag drop to the 19th hole.

The Moorland Course at Legends Resort is one of Myrtle Beach’s most talked about designs. The course is renowned for the size of its fairways and greens, but it’s the short, par 4 16th, known as Hell’s Half Acre, the people never forget.

The long-time host of the Hootie & the Blowfish Monday After the Masters Celebrity Pro-Am, the Dye Course at Barefoot Resort is a vintage Pete Dye design that has been ranked among America’s 100 Greatest Public Courses.

Heritage Club is a lowcountry classic, playing through soaring Live Oak trees draped in Spanish moss and around the marshy waters of the Waccamaw Neck.  The Dan Maples design is one of the area’s most popular courses.

The Grande Dunes Resort Course has seven holes that play along the Intracoastal Waterway and has earned its place on any short list of the area’s best layouts. The course is highlighted by the par 3 14th, which plays downhill to a green the buffets the waterway.

For more information on Myrtle Beach golf, visit www.MyrtleBeachGolfHoliday.com.
Posted by Blogger at 10:10 AM