(RELEASE) - Birdie Ball, the company famous for its Napkin Ring shaped golf ball, has introduced a revolutionary heavy cross section, putting surface with enough thickness to allow for drop-in-the-hole cups and extraction flags. Surface is comprised of mown nubs of a very “grass-like” fiber which is oriented at an angle creating an “into the grain” and a “down the grain feature.” 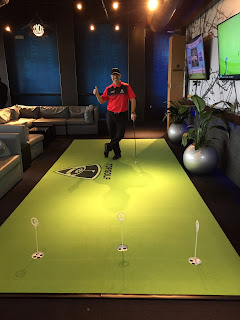 Synthetic turf greens do not have this feature, golf balls roll on the top of the synthetic grass, tracking down the pattern of the weave as they slow toward the hole.  As a result there is an unmistakable wobble as a golf ball slows on a conventional woven synthetic turf putting surface and falls into the pattern.

With a natural putting green the grain is oriented in the direction of the setting sun, the blade actually leans that direction. As a result, the speed of a golf ball rolled with the same energy travels less distance into the leaning blade and more distance with the leaning blade. Further, when mown, this blade of grass is changed to a “nub” of grass. This nub varies in height from .200” (on a high traffic municipal course) down to .100” (on a U.S. Open course). The height, density and grain determine the speed of a green both in nature and on the BirdeBall putting surface.

BirdieBall, putting greens are available in speeds from 8 to 14 on the stimpmeter. The grain feature allows for a putting green with two speeds, one down grain and one into the grain. Typically the speed is one foot slower into the grain than down grain. Standard speeds are 9-10, 10-11 and 11-13.

The thickness of the putting surface allows for the ball to fall into the cup which installs from the bottom of the green and is held in place by a thin flange. The thickness of the green can be enhanced by adding a second layer of under lament below the putting surface. Heavy rubber trim along with a clear stopping bumper is supplied for the ends of the putting greens and is easily snapped on to prevent golf balls from rolling off of the surface.

The greens are designed to roll up easily and store away. For more permanent installations, a heavy rubber trim can be added as edging on the green.

Greens can have a custom image or logo printed on the surface also up to 30-feet long.

For more information, visit www.birdieball.com.
Posted by Blogger at 1:01 PM