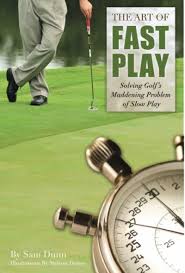 "Playing in four hours isn't about hurrying; it's simply about not wasting time. There are countless ways to waste time in a round and most of them are so small as to be nearly invisible. It's death by a thousand cuts. So golfers need to be alert to any opportunity to avoid wasting time. This means knowing who needs help looking for a lost ball, knowing who's away, who should be tending the flag, and so forth. An efficient round requires awareness and teamwork," said Dunn.

"Many golfers don't play at anything close to a four hour pace. This isn't because they are ignorant or rude; it's because no one has ever taught them how," Dunn analyzes how time is spent in a four hour round and concludes that golfers must execute every shot within 20 seconds of when it is their turn to hit. "The most important advice I can offer is for golfers to be prepared to hit their ball when it's their turn, and to get their shot off in 20 seconds or less. It's ok to have a pre-shot routine but many just take way too long."

With chapter titles such as "Find It and Hit It," "When It's Your Turn, Be Ready to Hit," "Operate Carts as a Team," "Know Yourself and Your Playing Partners," and "Change the Culture," Dunn covers all aspects of how to speed play. Among many others, Dunn offers these key tips:
• Tee selection. Select the tees you play based on your realistic ability. If you can't reach most holes in regulation move up a tee. You will have a lot more fun because for the first time you will be playing the game as it was meant to be played.
• Watch every shot intently. Follow the flight of all your shots and those of your companions and note a landmark near where they land. Nothing wastes time like looking for balls in the wrong place.
• Park carts behind the green. It isn't good enough to park next to the green because the group behind can't hit until you walk off, put away your clubs and drive away.
• Never leave the cart without the club you need to play your shot. It's a big waste of time to go back and forth to the cart because you have the wrong club or worse, no club at all.
• Bunker shots. Enter near your ball, carrying a rake with you. This avoids raking long lines of footprints.
• Before you play. Have a ball marker, a green repair tool and several tees in your pocket. Turn off your cell phone ringer. And come armed with a quick pre-shot routine. It's too late to create one during the round
• Leadership and demeanor. Be the one to prod your foursome into faster play if you are falling behind. Practice teamwork. And never be afraid to complain about slow play when you see it - whether it be to your playing partners, the group ahead, rangers or management.

The total number of golfers and rounds played has decreased in the past several years, and slow play is a big factor in this. Attracting new golfers hinges on making the game more enjoyable and a key part of this is reducing the time it takes to play.

"Pace of play is one of the biggest issues we have in golf. For many golfers and potential golfers, slow play is killing the game," said Charlie Rymer, Golf Channel analyst. "The Art of Fast Play should be required reading for golf clubs, associations and especially junior programs."

Dunn has been playing golf for more than forty years, and during that time became frustrated with how long it took to play, which led him to writing "The Art of Fast Play."

"Golf is such a fun game when the pace is right. But when it's slow its pure agony," said Dunn. "The problem of slow play isn't going to be solved by the USGA or The PGA of America. It will be solved only when all golfers accept responsibility and decide to do something about it."

"The Art of Fast Play" is available through Vineyard Stories at vineyardstories.com and amazon.com for $14.95.

Dunn is an architect and builder living in Massachusetts and Washington, D.C. He is one of the owners of Whisky Creek Golf Club in Ijamsville, Maryland, where the course has implemented many aspects of the author's advice. "The Art of Fast Play" is his first book.