(CARLSBAD, CA) – Ahead of The 142nd Open Championship, adidas Golf today staged a unique golf experience at North Berwick Golf Club to launch its latest GORE-TEX waterproof outerwear, in preparation for the renowned Scottish weather conditions. To celebrate the release of their innovative performance range, the brand created the ultimate weather simulator designed to replicate the worst of Mother Nature. 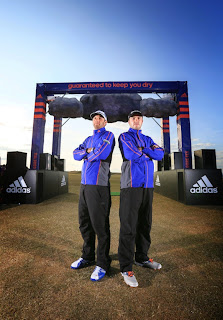 In front of the world’s media and assembled crowds, PGA Tour stars Dustin Johnson and Martin Laird went head-to-head in a nearest the pin competition. From blustery conditions through to the perfect storm, the players experienced the full range of traditional Scottish weather as the notion “it never rains, but it pours” became a reality.

For the first four shots, the weather conditions were determined by a spin of a ‘weather wheel’ and for the final, and ultimately deciding shot, the facebook fans determined just how tough the weather should be via an online vote. The adidas Golf Tour professionals hit shots towards concentric rings postioned around the pin on the iconic 1st green and earned points for promiximty to the hole on each shot. Each ring represented a different points value with the winner decided by most points accumulated. While taking on the challenge Johnson and Laird both wore the soon-to-be released adidas Golf GORE-TEX rain gear to battle the erratic weather, proving that even the harshest of elements did not affect their performance.

Weather the Storm was supported by digital and social media activation across adidas Golf channels which included the creation of a unique event app – allowing Facebook users to join the fun and decide the conditions the weather machine would throw at the professionals for their final and deciding shot. All those who took part on Facebook, have been entered into a draw to be in with a chance of winning  the tournament collection of GORE-TEX apparel and adidas Golf footwear – also being worn be Dustin and Martin at The Open Championship.

Following his wet weather experience Dustin Johnson said: “I know this part of the world is renowned for bad weather, but that was something else! It was great fun taking on Martin in his back yard, and having faced these conditions I’m now fully prepared for whatever the weather throws at us this week.”

Developed to protect athletes in the most inclement weather, the adidas Golf GORE-TEX rain suits are designed to withstand adverse weather without sacrificing flexibility, comfort or range of motion during play. The waterproof suits will debut this week at Muirfield, with all adidas Golf Tour staff players carrying them during the tournament.

As a gesture of goodwill, adidas Golf donated £5,000 to the challenge winner Dustin Johnson, who in turn has pledged the money to East Lothian Special Needs Play Group, a local charity purely funded by donations that works with children with a wide spectrum of physical and mental needs.