(FALLS CHURCH, VA) - Tin Cup Products - maker of patented, Made in the USA golf ball marking stencils - announces it has added a new design to its military collection honoring the exceptional history and traditions of the United States Military Academy. 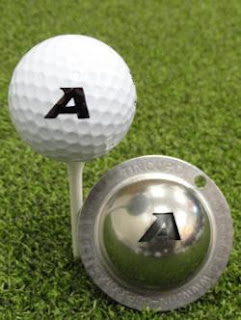 Constructed from 100 percent stainless steel, the "U.S. Military Academy (Army)" model ($19.95) highlights the signature "A" logo of West Point, which has been a bastion of excellence since 1802. The stencil allows players to personalize their golf balls in seconds by placing the Tin Cup over a ball and tracing the template using an ultra fine point permanent Sharpie.

"We deeply value our relationship with the United States Armed Forces community, which has shown tremendous interest in our patriotic and military themed styles," says Cabell Fooshe, Vice President of Tin Cup. "Historically and to this day, the population of active duty and retired soldiers includes some of the world's most passionate golfers."

Since being named "Best New Product" at the 2010 PGA Merchandise Show, the company has grown rapidly. Its collection now features more than 90 designs, including officially-licensed collegiate logos.