(RALEIGH, N.C.) — Members and staff of TPC at Wakefield Plantation were duly impressed Monday when Carl Pettersson dropped off his new tartan jacket to be displayed in his home club’s golf shop. 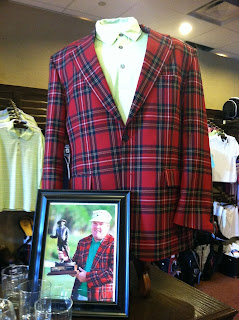 Pettersson not only earned the tournament champion’s customary tartan jacket and a paycheck totaling $1,026,000. With his fifth career title the former N.C. State All-American — who has been a TPC at Wakefield Plantation member and resident since 2006 — also tied Jesper Parnevik as the all-time leading tour winner for Swedish players.

For McConnell Golf members, Monday’s brush with greatness was their second in as many weeks. Just eight days earlier, in an Easter Sunday win for the ages at Augusta National, Old North State Club member Bubba Watson claimed his first green jacket by executing one of the most clutch shots in PGA Tour history and holding off Louis Oosthuizen on the second hole of a Masters playoff.

For Watson, his Masters victory was considerably more challenging than the one he earned last summer at the Old North State Club championship, during which he shot 66-63 and finished with a final-nine 28.

“I think everyone involved with McConnell Golf, members and staff alike, are very proud and happy for both Bubba and Carl,” said John McConnell, president and CEO of McConnell Golf, which owns both Old North State Club and TPC Wakefield.

This week, the Men’s ACC Golf Tournament returns to the Old North State Club for the 16th time overall and 11th consecutive year the event has been contested there.

The ACC Women’s Championship was contested at Old North State in 1994 and began its lengthy partnership with the men’s event the following season.

Also in the McConnell Golf stable are six other premier, private clubs in the Carolinas including Sedgefield Country Club in Greensboro, a Donald Ross classic and annual host site of the PGA Tour’s Wyndham Championship.

“We enjoy being the ACC’s partner for their golf championships and we appreciate the fact that their teams look forward to competing on such high-quality courses that our members enjoy on a routine basis,” said McConnell. “We are proud of the fact that our championship courses are fun for everyday players, as well as the world’s best professionals.”