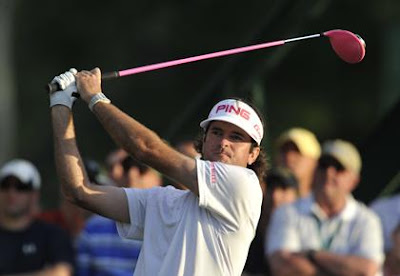 All our lives, men have been told that pink is a girl's color and "big boys don't cry." Bubba Watson proved both VERY wrong at last week's Masters.

Not only did Bubba - one of the game's longest drivers - wear pink, he also drove with a pink PING driver ... all the way to the much-coveted green jacket. To top it off, the emotions overcame him and he cried.

Never was the color pink so manly.

Bubba is quite possibly more in touch with his emotions than any player I've ever seen. While you don't see him explode on the course, curse or throw (kick ... looking at you, Tiger) his clubs, you're likely to see him tear up in a post-round interview. He cried when he earned his playing card, when he cashed his first check, won his first tournament, etc.

Following the Masters, one of Bubba's biggest sponsors - PING - announced it was selling a version of Bubba's winning driver and a portion of the proceeds would go to charities. Demand was overwhelming and PING upped the donation.

Bubba Watson's performance at the Masters keeps on winning. Congratulations, Bubba!
Posted by Blogger at 9:37 AM