Inside, Outside, and On the Ropes: Life Lessons from Q-School and The Majors 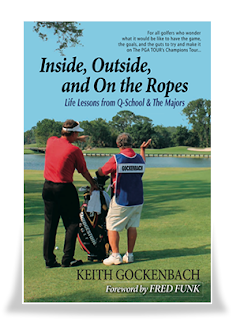 With about 12 million Americans out of work and another 2.5 million working less than they want, it's surprising that we could be facing a labor shortage in the near future. In just six years, there could be more jobs than people to fill them, according to recent research funded by MetLife Foundation and Civic Ventures.

In addition, as many as 8 million people in this country have finished one career and started a second, says Keith Gockenbach, a chemical engineer who retired to pursue dual second careers as a professional golfer and author.

In his book, Inside, Outside, and On the Ropes: Life Lessons from Q-School and The Majors (www.insidetheropesgolf.com), Gockenbach writes about the lessons he learned while trying to make the PGA's Champions Tour. They're lessons that also apply to job hunters and those seeking a new, perhaps more gratifying career.

"I was able to pursue my dream but the odds were long. Looking back, I saw much of what I learned could easily apply to other professions. I learned these things on a golf course but they can work anywhere," Gockenbach says. "Don't sell yourself short in golf or in life."

One he found most personally useful emerged as he battled the frustration and disappointment that come with weekly battles just to make the next tournament.

"You have to fight your way back the same way you'd eat an elephant," he writes. "A little at a time. Patiently. Calmly. Pace yourself. One shot at a time."

Some others:
• Know the rules. Breaking a rule, even inadvertently, can cost you the game -- or the job. And in real life, as in golf, ignorance is no defense. Don't break the basic, common-sense rules associated with integrity - for instance, don't lie on your resume. And do take time to learn the rules and expectations relevant to the job you want and the field you want to work in.
• You can only take what the course gives you. You can't live your life looking backward. If you make a misstep during an interview, don't agitate about it all night. Get up the next morning and do something positive for someone.
• Don't scrimp on the important stuff. Buying a high-quality suit and new shoes before an important interview or presentation might cost $1,500, but it could earn you a better job or promotion. Invest your money where it pays off.

Gockenbach's book chronicles his quest to play in professional golf's Champion's Tour for players 50 and older. It's the story of a day-to-day struggle for someone reviving the dream of his adolescence fairly late in life.

His efforts crystallized in his final lesson: "Chasing a dream is a job, not a hobby."

"It's the extra two or three hours every day that the professionals put into practice (both physical and mental) that make a difference, even when they're playing in a tournament," he writes.