Dumbarnie Links History Dates Back to 1837 and The Hercules Club 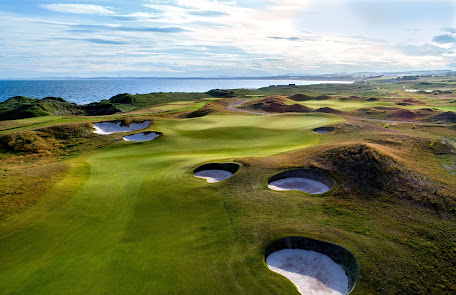 (FIFE, Scotland) – Dumbarnie Links, a premier daily-fee links course located on the east coast of Scotland near St Andrews that opened for play in 2020, has a surprisingly rich golf history dating back to 1837. Details of the once famous Dumbarnie or Colinsburgh golf club have been recently unearthed.

The first ‘meeting’ occurred on November 9th, 1837 when the first competitive round in history records Mr. John Wood, a banker from Colinsburgh, winning in a playoff with Sir Ralph A. Anstruther Bart of Balcaskie, after both came in equal at 109 strokes.

By the end of 1837, the Hercules Club had enrolled 47 members, comprising of almost all of the landed proprietors in the neighbourhood. Often the meetings would commence with rifle shootings and conclude with formal dinners. Meetings would take place two to three times per year with the purpose of the club being to embrace a great variety of games and exercise.

The Hercules Golf Club joined forces with the East of Fife Gymnastic Club who had played games on the Dumbarnie Links since 1835. Athletics, rifle shooting and golf were often played over the links and were known as the "Colinsburgh Games and Golf Meeting."

The following report appeared in the Fife Herald on Thursday 29th May 1845:

“Hercules Golfing Club - On Friday last, the members of this distinguished club met on Dumbarnie Links to play for the "Halkett Craigie" medal, which, after a keen competition, was gained by George Todd, Saltcoats, Haddingtonshire. At five o'clock twenty-one of the members sat down to dinner in Mr. Ronald's Inn, Colinsburgh. In absence of Colonel Lindsay of Balcarres, their captain, Robert Gillespie Smythe of Gibliston, was called to the chair; Mr. George Wood, secretary to the club, acting croupier (assistant chairman). After the loyal toasts were given, the health of Charles Halkett Craigie (the "laird of the links") was proposed and warmly responded to.

In August 1845, the ‘Colinsburgh Gymnastic Games and Golf Meeting’ had official prize money of up to 200 Sterling for the ‘running high leap.’ The competition for the members of the golf club was the Hume Medal. It is reported that a vast number of people assembled to Dumbarnie Links for the proceedings, up to eight thousand, whom enjoyed refreshment tents and a live band. According to media at the time, the scenes were imposing and happy. The Hercules Golf Club commenced play at 10 o’clock, where 18 competitors took to the links for two rounds. After two rounds on the course there was a tie for first place between William Clark, Hallhead, and Mr. Martin, Edinburgh; Mr. Clark won the playoff for the medal.

In July 1847 it was announced by George Wood, club secretary, that the Hume Medal would be played on the 23rd July. This would be followed by dinner at Mr. Ronald's Inn.”

The following report appeared in the Caledonian Mercury on Monday 24th July 1848:

“Colinsburgh Games and Golf Meeting - The meeting for the gymnastic games and the Hercules Golf Club competition for the Schiehallion Medal, presented to the club by Captain Campbell, St Andrews, came off on Dumbarnie Links on Wednesday the 3rd. The golf competition commenced the proceedings and after a spirited contest of two rounds of the Links, was gained by John Clark, Wormiston, 105 strokes. The members, after partaking of a cold coallition in the Golf House, proceeded to the gymnastic arena.

The competition for The Scheihallion Medal was played on the 13th July 1849 and was won by the champion of Leven Links, David Wallace, with a score of 97.”

These traditions and games ensued through to the last records dated in 1870, when players may have favoured Leven Links instead. It is believed that the last members were Rintoul of Lahill, Morgan of Coats, and John Flockhart, Banker, Colinsburgh. It was of the nature of an athletic society and the golfing section now represented by the flourishing Elie Golf House Club, and the curling by the Hercules who play on Kilconquhar Loch.

“While we are a new golf course, it is most interesting to learn that just a stone’s throw away from the land where Clive Clark’s design is blossoming, was once a fine golf course where notable gentlemen of their day enjoyed many matches.  We are proud of the club’s rich history and felt it was important to tell the Dumbarnie story. As we have now closed for the winter to rest our young links, we look forward to welcoming our golfers back when we re-open on Friday 14th April 2023.”