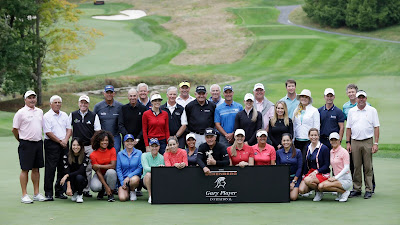 A total field of 72 professional golfers and business leaders took on the picturesque and challenging Gary Player-designed GlenArbor Golf Club in Bedford to compete for the prestigious Baobab Tree Trophy. Among the all-star field were 14 Major Champions, 6 Ryder Cup stars and a total of 32 stars from the Champions, PGA, LPGA and LPGA European tours.  The team led by tournament host Gary Player and LPGA European Tour star Azahara Muñoz emerged victorious in a sudden death playoff to take home the iconic trophy.

“What Mr. Player has done for the game and the world as a whole is truly inspiring, so I jumped at the opportunity to be a part of his event for the first time,” said Munoz.  “Just being here surrounded by all of these legends is thrilling and then to actually be paired with Mr. Player and help him win his own tournament.  It really doesn’t get any better.”

The Player Foundation marched closer towards its fundraising goal for underserved youth and communities in need worldwide, a mission that has been aided greatly through the generous support of corporate partners Rolex, SAP and the event’s title sponsor, Berenberg, the world’s second oldest bank.

“The ‘Union of Golf and Giving’ is a wonderful example how sport and charity go hand in hand,” said David Mortlock, Head of Berenberg’s Investment Bank. “Our work with Gary Player on this event series over the past 8 years has had a positive impact on countless lives, and his commitment to helping others serves as a tremendous example for us all.

Tournament host and golfing legend, Gary Player, is renowned for his commitment to philanthropy, especially as it relates to future generations. “Out of all the things I have achieved in my life and career, I am most proud of the impact The Player Foundation has made on those in need.  From ensuring proper education for underserved youth to helping communities in need, my Foundation continues to be the driving force behind all that I do.  None of this would be possible without having corporate partners like Berenberg that share my vision. I can’t thank all our sponsors and guests enough for their support at another unforgettable event.”

The next stage of the global series is the Gary Player Invitational at Lost City Course in Sun City, South Africa on November 22-24.