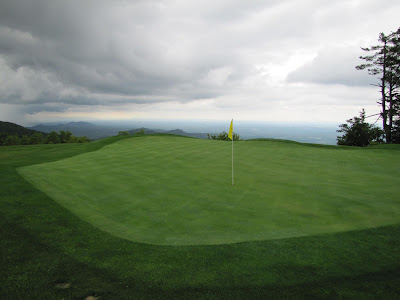 The project focused on a number of areas, most notably green and bunker restoration. Using old aerial photos and many original plans drawn up by Ross, Spence brought back to life a unique set of greens buried under eight decades’ worth of topdressing and organic material.

Mindful of Roaring Gap’s rich history, Spence took extra care on this project. The club dates to 1926 with roots that can be traced directly to Pinehurst.

The club’s founder and first president, Leonard Tufts, was president of Pinehurst at the time, so Tufts commissioned Ross to build a mountain masterpiece in Alleghany County to be promoted as “the Pinehurst of the hills.”

With such an important legacy, the club turned to Spence to recapture and reclaim the course’s architectural pedigree, while updating it slightly for modern play. Spence is considered one of the nation’s premier Ross restoration specialists.

“A large majority of club members were overwhelmed by the outcome. People are raving about how much the greens exceeded their expectations,” said Dunlop White III, a long-time member of the club’s greens committee and past president of the Donald Ross Society. "Kris’s understanding of how the greens evolved over time was critical to the project’s success. He really devoted his skills to bringing back Ross’s distinctive design work here at Roaring Gap.”

White said so much of the greens had been lost over time that current golfers assumed the knobby regions outside the perimeters were chipping areas. Instead, they were integral parts of the original putting surfaces.

“These were 86-year-old greens which had never been touched. No one remembered exactly how they were,” said White. “I’m thrilled with what was uncovered. It was like finding a long lost treasure.”

“We’ve all been taken aback by how well this restoration turned out,” Spence said. “Uncovering such wonderful Ross greens is certainly a highlight of my career.”

In addition to the greens, the project renovated and restored most of the original bunkers, particularly fairway cross bunkers that Ross considered an integral part of the game. Tees were leveled and squared, with several new tees created to adjust distance for the modern game.

One unique way the project retained the course’s rustic charm was the preservation of various turf blends and mutations which had naturally evolved over time.