(HUNTINGTON BEACH, CA) – Cleveland Golf/Srixon congratulates staffer Graeme McDowell, who closed with a 4-under-par 68 to win the 2012 World Challenge presented by Northwestern Mutual by three shots on Sunday for his first victory in two years. 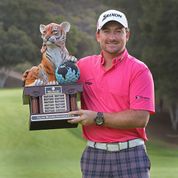 McDowell had to hold off fellow Cleveland Golf/Srixon staffer Keegan Bradley, who was only two shots back with five holes to play. McDowell executed some key short-game shots down the stretch and clinched the win with birdies on two of his final three holes. During a soggy week at Sherwood Country Club in Thousand Oaks, Calif., McDowell at one point went 41 holes without a bogey and finished the tournament with only three bogeys. His final round on Sunday also marked the 10th time in 12 rounds at Sherwood he has shot in the 60s. In three trips to the World Challenge, McDowell has won twice and finished second once.

"This really caps off my season," said McDowell, a 33-year-old native of Portrush, Northern Ireland. "We try not to put winning on a pedestal, but this one feels very sweet because it's been a grind all year."