(Westwood, Kansas) - World Golf Hall of Famer and eight time major championship winner, Tom Watson, and Tom Watson Productions announced that 'Tom Watson Lessons of a Lifetime' is now available in Japanese, French and German. A Mandarin version will be released in the near future. 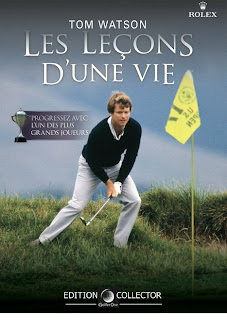 The English language version has been the top selling instruction DVD in the United States, Canada and the UK and has been sold in over 30 other countries. The program has been lauded as clear, comprehensive, classic golf instruction and is directed at golfers of all skill levels.

The two-DVD set containing close to three hours of golf instruction and an accompanying booklet of 44 lessons was filmed at The Greenbrier Resort, where Watson is Golf Professional Emeritus. This instructional program is the ultimate learning experience, covering all facets of the game-from the grip to full shots, to chipping, putting and the secret of his timeless swing, plus specialty shots including those required in strong wind conditions.

Directed by award-winning Terry Jastrow, 'Lessons of a Lifetime' embodies the practical experiences and competitive winning strategies that have earned Watson professional recognition as one of the greatest players of all time. "Tom Watson applies the same sense of determination and purpose in his new DVD instructional set," says Jastrow, "as he has to his competitive golf game. It's 50 years of experience from one of the game's masters."

Watson ranks 6th on the list of total major championship victories with more wins than Bobby Jones, Sam Snead, Arnold Palmer and Phil Mickelson. Watson is one of only 14 players to have won at least three of the four golfing major titles.

Encyclopedic in its skill and strategy coverage, 'Lessons of a Lifetime' is a defining instructional medium and will be a must for beginning golfers and weekend warriors as well as experienced golfers wanting to step up their game.  Watson says, "It's very important that golfers-whether they are beginners or have played for 50 years-learn and understand the fundamentals. These are the building blocks every golfer needs to have in order to play up to their potential but, more importantly, to have fun."

From playing in the wind, to hooking and slicing, to fearless putting, Watson breaks them down in an easy-to-understand manner. Golfers can begin applying these lessons of a lifetime the next time they stand on the first tee with their friends. Watson teaches his lessons of his lifetime as if golfers are there with him.

Consistency, contact, alignment, firmness of grip, pivot points, release, rhythm and legendary coach, Harvey Penick's "dead-aim" philosophy are all covered in the two comprehensive DVDs. Watson's
instruction comes across in an easy-to-understand manner making it seem your standing right beside him on the tee or green.

In 2011 Watson won the Senior PGA Championship. In 2009 Watson pulled off one of sports history's most-memorable moments when he made an incredible bid for his sixth Open Championship title, taking Stewart Cink to a four-hole playoff at Turnberry. Four of Watson's seven top-10 finishes on the 2009 Champions Tour came in major championships.