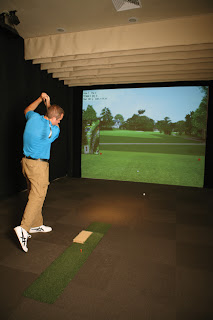 As a public course with a renewed focus on year-round golfers, Pease celebrated the grand opening of its new clubhouse in early 2010 and features three of aboutGolf's renowned PGA TOUR Classic Simulators. The simulators, which include the exclusive, premium TPC Collection course pack of Sawgrass, Scottsdale and Louisiana, have been a draw for patrons who haven't traditionally visited Pease Golf Course.

According to Scott DeVito, PGA General Manager, Pease Golf Course, younger golfers and even members of local private clubs have been curious about the technology and have played a role in the success of the new "indoor golf season."

Although Pease has embraced and benefitted from the technology and the future of off-season golf, DeVito notes that the simulators are also utilized year-round.

"Pease professional staff also uses the simulators in the summer, giving lessons indoors during inclement weather, rather than rescheduling the sessions," he says. "Installing the PGA TOUR Simulators has proven to be beneficial in so many ways."

DeVito was initially introduced to aboutGolf's technology at the annual PGA Merchandise Show, where the company and several of its competitors regularly showcase their equipment.

"I was hooked on aboutGolf technology after playing on a PGA TOUR Simulator just once," he recalls. "Their systems are the most user-friendly and make playing on a simulator as simple and enjoyable as playing a round on the actual course."

Golfers who want to learn more about Pease Golf Course and its aboutGolf Simulators are invited to visit www.peasegolf.com or call 603-433-1331 to book a lesson or round.