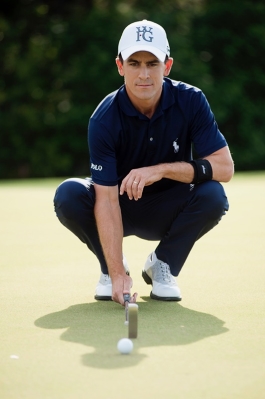 Early on in the game, Scott Langley was behind, but remained positive stating, “I looked at the leaderboard and thought, ‘You know, these guys are playing great but this course is tough and anything can happen.’” As Langley chipped away at the deficit, he realized the tournament trophy was within reach and he could be walking off the green with his first victory since the 2010 NCAA Individual Championship. Langley’s come-from-behind win at the 2018 Panama Championship is the biggest in tournament history, exceeding Miguel Angel Carballo’s five-stroke record from 2007.

“Over last two years, we have watched Scott constantly strive to be at the top of his game and have always admired his work ethic,” said Lauren Fifield Zamst U.S., Marketing Director. “To watch him hoist up that trophy at the Panama Championship was a true testament to his devotion to the game and dedication to training. We pride ourselves on making the world’s best compression and bracing products to help golfers like Scott remain injury free and perform at the highest level, and are thrilled to celebrate this victory with him.”

Zamst has been supporting Langley since 2016 with their premium line of injury prevention and protection sports bracing and support products. The University of Illinois alum prioritizes recovery and injury prevention to optimize his on course performance. During and after training, Langley relies on Zamst’s Arm Sleeves and HA-1 Compression Socks to improve circulation and encourage blood and oxygen flow to muscles, aid with flushing out lactic acid, and reduce muscle fatigue. Off the course, Langley’s recipe for recovery includes Zamst’s mobile icing and compression solutions, like the IW-1.

“Any elite athlete will tell you that constant travel, training and competing takes a toll on their body,” comments Langley. “With Zamst products, I can comfortably and efficiently incorporate recovery and injury prevention into my plan, and this has been instrumental in my ability to remain healthy and compete at the highest level.”

Langley is part of the Zamst Elite Team of leading professional athletes that include Von Miller, Addison Russell, Ryan Getzlaf, Melissa Arnot Reid and Amy Cragg among others. For more information about Zamst and the Zamst product line, visit www.zamst.us.
Posted by Blogger at 11:10 AM