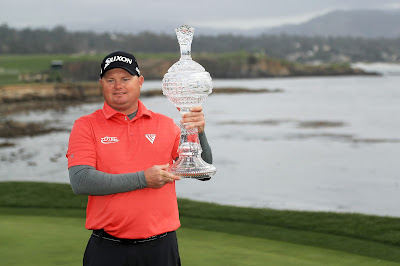 (HUNTINGTON BEACH, CA) – Trusting the tour-validated performance of his Srixon and Cleveland Golf equipment, Ted Potter, Jr. stared down the world’s best on his way to a three-shot victory in the AT&T Pebble Beach Pro-Am at Pebble Beach Golf Links in Pebble Beach, CA. He followed Saturday’s brilliant 62 with a near-flawless final round to capture his second career PGA Tour victory.

Entering the final-round tied for the lead, Potter bogeyed the opening hole to drop one behind the lead.  That would prove to be the only blemish on the card for Potter on Sunday, as he reclaimed the lead by the fifth hole, and never relinquished it.  Potter knows a thing or two about overcoming adversity. After his first PGA Tour victory in 2012, he would suffer a devastating ankle injury that took years to recover from.  This win is a true testament to Ted and his fight back to the top.

“It’s definitely pleasing, it was a struggle there, when you break your ankle and you don’t know what’s going to happen with your golf swing,” Potter said. “To come back from that, I mean, it’s just unbelievable right now.”

Potter’s Z-STAR XV golf ball and Cleveland RTX-3 wedges helped him to a flawless short-game performance all week which also earned him the number one spot for most birdies in the field (24) and jumped up 102 spots in the FedEx Cup Rankings. On the day, Potter was perfect around the greens, converting every up and down opportunity he faced.

For additional information on Srixon / Cleveland Golf / XXIO products and staff players, visit the following sites: www.srixon.com, www.clevelandgolf.com, and www.xxiousa.com.
Posted by Blogger at 10:46 AM