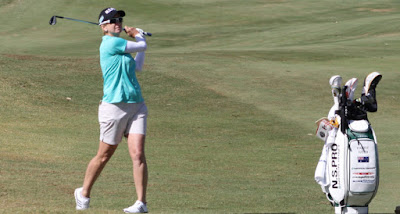 (ARTICLE) - Karrie Webb is hopeful that scaling back her job to “part-time” will keep her fresh enough to gain some work-life balance and extend her career.

Webb, 43, will chase her sixth national title and 42nd LPGA win when she tees off in the ISPS Handa Australian Open at Adelaide’s famous Kooyonga Golf Club tomorrow.

However, unlike past years when it was the first of six events in seven weeks for Webb, the tournament in South Australia could be one of only about 10 this year on the global LPGA Tour.

“I think this will be my 23rd season and golf’s a 12-month commitment. As the years have gone on I’ve still put golf first but the last handful of years I haven’t felt good about always choosing golf,” Webb told reporters at Kooyonga today.

“I’m trying out the part-time schedule this year … so hopefully I can take part in some life events and still play some golf, because I still feel like there’s a little bit left there.”

Webb is also considering playing some events on the Legends Tour in the United States, which she will be eligible for once she turns 45.

“I guess I’m not quite ready to put the clubs away. I’ll see if I can do both and we’ll just assess it as time goes on.”

However, she said she feels ready to compete this week despite only playing one tournament since September.

“I feel quite fresh and ready to play this week. I’m pretty happy with the practice I’ve done, so we’ll just see what happens,” the North Queenslander said.

“I’ve come here the last few years and it’s the start of that hard slog (but) coming here this week, just with a completely fresh mindset and actually looking forward to playing, so that’s what I hope the part-time thing is.”

As Webb looks towards the twilight of her career, West Australian 21-year-old Minjee Lee is steadily marching towards the world’s top 10.

Lee won her maiden LPGA tournament in the United States in 2016 and tuned up for this week’s tournament in Adelaide with a win in the Victorian Open and a runner-up finish in the Canberra Classic last week.

She said her goal was to win this week.

“I don’t think anybody comes into a tournament not wanting to win,” Lee said.

“I think all the Aussies are getting stronger. It’s going to be a really great tournament, everybody’s playing well.”

The tournament’s LPGA status means it has prizemoney of about $1.65 million (US$1.3 million), significantly more than the $1.25 million on offer at the men’s Australian Open.

Kooyonga was the home club of Sir Donald Bradman and has hosted the Men’s Australian Open five times but it will be the first time the national women’s open is played at the Lockleys course in suburban Adelaide.

It is the third year in a row the event has been held in Adelaide following successful events Royal Adelaide and The Grange.

South Australia has positioned itself as a hub for elite women’s sport and also hosts annual international cycling event the Women’s Tour Down Under.

It was announced this week that the South Australian capital will continue to host the Australian Women’s Golf Open until at least 2021.

This is a Creative Commons story from The Lead South Australia, a news service providing stories about innovation in South Australia.
Posted by Blogger at 11:43 AM