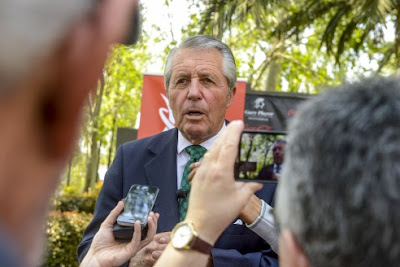 (RELEASE) - The Gary Player Invitational presented by Coca-Cola, South Africa’s most successful charity golf tournament, will continue to receive support from The Coca-Cola Company and Sun International by partnering with The Player Foundation in their commitment towards raising $100 million for charity worldwide.

The continued support of Coca-Cola and Sun International for a further three years is a resounding endorsement of a tournament that first teed off in 2000 as part of Gary Player’s vision to raise funds for underprivileged children in South Africa. The tournament has since grown to include a global series of six tournaments worldwide raising more than $62 million for charity.

The Gary Player Invitational remains the single most influential series of charity golf tournaments in the game, traveling to Japan, the United States, the United Kingdom, China, Abu Dhabi and South Africa as part of Player’s quest to raise $100 million for underprivileged children.

At the official launch of the 2016 Gary Player Invitational presented by Coca-Cola on Thursday, Player expressed his excitement and gratitude about the future of this tournament.

“It is so humbling that every year we are able to bring together our friends, professional golfers, celebrities and some of the world’s most influential business leaders to take part in our pro-am tournament that has one common goal, and that is to help our fellow human beings,” said Player. “But you cannot do this without the support we receive from our partners. The Coca-Cola Company has been such a longstanding supporter of our philanthropic efforts and we are blessed to have them as our partner. Sun International also shares our vision and does an incredible amount of good in the local community around Sun City. I am extremely thankful to have a Major champion such as Michael and a young star like Haydn lend their support to our cause.

“I’m very proud to have such a powerful team behind our tournament, and it’s one of the reasons I know we will be able to reach our goal of raising $100 million for charity. It’s only when you have partners who are so closely aligned to your own vision that you can truly make a difference, and all our global sponsors have always shared this vision of creating a sustainable future for our communities.”

The Black Knight’s association with both The Coca-Cola Company and Sun International goes back many years.

In 1965, the same year Player became the first non-American and only the third golfer in history to win the career Grand Slam, he and Coca-Cola first joined forces in a relationship that has remained strong ever since as they’ve promoted their “Healthy Choice” initiative and their focus on juice and water.

“As a company we are proud to be a partner to the Gary Player Invitational, a platform that enables us to play an important role in the development of communities through innovative sustainable projects in South Africa. Through this partnership we have been able to uplift communities especially women and young people in the country, and Gary Player’s passion to help the underprivileged is what keeps driving our own support of his cause,” said Kelvin Balogun, Business Unit Director Coca-Cola Southern Africa.

Player designed both the golf courses at Sun City, Sun International’s flagship resort, including the iconic Gary Player Country Club which helped put the resort on the map globally, and The Lost City Golf Course over which the GPI will be played.

He is also the longstanding ambassador of Sun International’s flagship golf tournament, the Nedbank Golf Challenge, and this year is the tournament’s official host. Player has played a key role in the elevation of its status to a major European Tour event which this year forms part of the elite Final Series of the Race to Dubai.

“We are delighted to extend our partnership with Black Knight International and The Player Foundation in this prestigious golf charity event,” said Graeme Stephens, Chief Executive of Sun International.

“We have a longstanding relationship with Gary Player that goes back to the start of Sun City and his tireless efforts to promote it and South Africa to the world. The value he has added is immense. He is that rare individual who will be remembered as much for what he has done for charity as what he did in a glittering golf career, and we are proud to still partner with him in his efforts to keep making a difference.”

Since the tournament moved to its new home of The Lost City Golf Course in 2013, the first three years of this partnership have been a tremendous success as it has raised record amounts of money for underprivileged children in South Africa.

Marc Player, CEO of Black Knight International said, “The extension of our association with all our sponsors and especially Sun International and Coca-Cola is indicative of the success of our partnership and the strength of the collective vision of all parties to keep working to help improve the lives of underprivileged children in South Africa and around the world.”
Posted by Blogger at 11:16 AM

Do you love Pepsi or Coke?
PARTICIPATE IN THE POLL and you could receive a prepaid VISA gift card!