(JACKSONVILLE, FL) - In 2009, Xander Dobreff was in a terrible car accident. During the wreck, a part of the car went through his elbow creating a compound fracture that was nearly unrepairable. One of his biggest passions in life was playing golf. It appeared that the accident would keep him from being able to play the game that he loved so much. 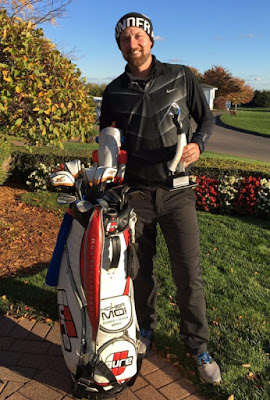 "The first question I asked the doctor was how soon I could play golf again," said Dobreff.  "He  told me I would never play again because my left arm couldn't withstand any vibrations, at all. I started to cry thinking about all the great memories I'd made on the golf course. Thinking of never golfing again with my Dad shook me up pretty bad. A couple weeks later I was with some friends who lived near me, they had been helping me get around and take care of myself while I was recovering from my traumatic injury. A few of the guys suggested that the doctor may have thought I was a quitter and that I didn't have the strength to recover from this injury.  My friends knew how mentally strong I was and challenged me to go across the street to the golf course and give it a try. My left knee was in severe pain all the time, walking was very difficult and a little dangerous as I face planted into the cement sidewalk quite a few times during my recovery. Being on the golf course and falling down in the grass when my knee gave out was a lot softer than the pavement.  The first time I went to the golf course I walked 9 holes and shot a 10 over par 46, with a couple mulligans, using only my right arm. Since that extremely difficult time in my life, God has truly blessed our family. I have become a loving husband, father of two wonderful children and have an amazing life.  I have become one of the best one-armed golfers in the world and been welcomed into the amazing family of other one-armed golfers through the (North American One Armed Golfers Association (NAOAGA)."

This past weekend, Xander accomplished another goal. He captured a victory on the Golf Channel Am Tour, and more importantly, he did it against able bodied golfers. Xander credits his Cure RX5 putter for playing a big part in his success and for helping him capture this latest victory.

"The Cure RX5 putter has been a fantastic addition to my game," said Dobreff. "For me, equipment is all about performance, especially under pressure. I have never in my life found a golf club that performs like the Cure putter does. I am currently rolling the RX5 with a straight shaft. I have the head weight somewhere around 600 grams and at a 79 degree shaft angle. The way this putter sets up...it simply can't miss. I'm a one armed golfer and I'm pretty good. But no one in their right mind would want me on their scramble team...until I got my RX5 that is. Now, people invite me to play on their scramble team all the time because they know I can help them win. I'm playing on the Golf Channel Am Tour against normal, able bodied golfers with handicaps ranging from 0 to 20, and I'm holding my own. I've been told by more than one person that I possess the best short game they have ever seen. Putting in golf is the great equalizer. When you're golfing with a disability that's what you need a great equalizer. My RX5 is exactly that, it's my great equalizer. One thing I know for sure is after people see me rolling my RX5, they immediately ask where they can buy one!"

You can follow Xander Dobreff on Twitter at https://twitter.com/xanderdobreff as he pursues his dream playing competitive golf on the Golf Channel Am Tour.

"We'd like to congratulate Xander on his amazing victory this past weekend," said Jim McCarthy, CEO of Cure Putters. "His is a truly inspirational story and we're so happy that our putter has helped him achieve his dream of continuing to play the game that he loves so much."

For more information on Cure Putters visit cureputters.com.
Posted by Blogger at 3:50 PM