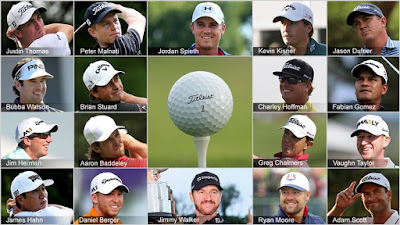 (RELEASE) - This year on the PGA Tour, Titleist was once again the #1 ball for more players and more champions. PGA Tour players relied on a Titleist Pro V1 or Pro V1x golf ball 3,643 times during the 2015-16 season, compared to 566 for the nearest competitor.

During that same time Titleist golf ball players recorded 21 victories, compared to 8 for the nearest competitor.

- Titleist Brand Ambassadors Adam Scott (Pro V1) and Jordan Spieth (Pro V1x) enjoyed multiple wins in 2015-2016. Spieth rang in the New Year with a win at the Hyundai Tournament of Champions and then claimed the crown at the Dean & Deluca Championship. Scott won back-to-back during the Florida swing, following up his win at the Honda Classic with a victory at the WCG-Cadillac Championship the very next week.

- Titleist Brand Ambassador Greg Chalmers (Pro V1x) became the first player to win on the PGA Tour with the new Titleist 917 driver. In July, Chalmers captured the first PGA Tour title of his career at the Barracuda Championship in Reno, relying on a new 917D2 (8.5°) model. Chalmers spoke about his 917D2 after the win, saying, “Thanks to Titleist I’ve got that new driver, the 917, and I gained some yardage and I started driving it straighter. I drove it beautifully. I really did drive it nicely so a big thank you to them.”