(Warwick, R.I) - Last year, BioMech Sports stood the golf world on its head with the release of the AccuLock ACE putter, which was designed based on biomechanics, physiology, and physics. The ACE promotes a healthier body by allowing golfers to stand tall when putting; reducing back strain while promoting better vision and a stroke that eliminates the unreliable small muscles of the arms, wrists, and hands. 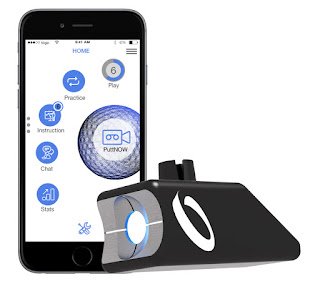 BioMech continues its wave of innovation with the introduction of the BioMech Golf App and real-time Putting Analysis Sensor, the first such products to not only identify mistakes in the putting stroke but to actually help fix them. Both the App and Sensor are being introduced at the annual PGA Merchandise Show, held in Orlando, Florida, January 27-29, 2016 (booth #1011).

All putting elements are graphically displayed in real-time on iPhone, iPad, and Apple Watch, and are available for subsequent review on any computer or digital device.

The putting sensor—which is the first of a planned series of devices—will work on any putter, not just those from BioMech. It is small and light weight, so it won’t affect the feel or dynamics of the putter. It can be properly attached and aligned in seconds.

Unlike competing technologies, this unique sensor communicates with the app in real time, providing immediate notification at any time during the putting stroke. Indicator lights on the sensor communicate the quality of the stroke, and the unique lighting design is visible both to the user and any nearby observer or instructor.

This last point is crucial as the putting sensor—and all future products from BioMech that work with the app—can be effectively used by a player working on their game individually or with an instructor. That makes the BioMech App the perfect teaching tool whether the instructor is standing next to the golfer or 1,000 miles away. The app also stores all data in the cloud, so it can be reviewed, reported on, or shared at a later time.

As BioMech CEO Dr. Frank Fornari describes it, “You can do things by yourself but you don’t have to do them alone—it’s like having an instructor with you at all times.”

The BioMech App is an extendable ecosystem that is simple to use, scientifically advanced, and designed to help golfers easily understand and improve their game.

For a nominal device fee and a monthly subscription comparable to the price of a sleeve of golf balls (less than $15), it’s much more affordable than comparable instructional systems, and can travel with you anywhere.

“We have created this system to be an extremely affordable way to help everyone in the world play golf, beginning with putting” says Fornari. “The BioMech system isn’t just for accomplished golfers but for everyone, regardless of their skill level. It will be a great way for those who’ve never played golf to enter the game by making good instruction easy, affordable, and always available. We want this system to help grow the game of golf while helping golfers everywhere play better.” BioMech will be unveiling additional App functionality and integrated sensors in the months ahead.

Learn more about BioMech and its products on the Company's web site: www.biomechsports.com.
Posted by Blogger at 10:13 AM