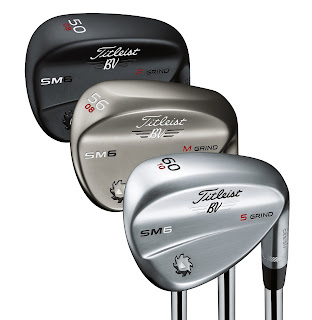 • A groundbreaking new Progressive Center of Gravity (CG) design aligns the CG with the impact position of each loft to produce precise distance and trajectory control with exceptional feel. Engineered using cutting-edge CAD technology, the Progressive CG is visible technology on the back of the wedge.
– Low Loft (46º-52º) SM6 models feature a low CG that increases ball speed on average by 1.5 mph (3-5 yards). This low CG position provides a precisely aligned progression from a typical iron set. It is visible technology, highlighted by a thinner topline and raised lower section.
– Mid lofts (54º & 56º) feature a mid CG position, precisely aligned between the low lofts and high lofts, that provides precise distance gapping and exceptional feel.
– High lofts (58º-62º) feature a high CG position that produces tighter distance dispersion, improved trajectory control and better feel. The high CG position is precisely aligned with the impact position of high lofted wedges, higher on the face. It is visible technology, highlighted by a raised upper section.

“These are the best wedges we’ve ever made,” Bob Vokey said. “Our engineers have taken everything I’ve learned working with tour players, PGA pros and amateurs over the last 20-plus years, everything (Vokey Tour Rep) Aaron Dill has learned from being on tour week in and week out, and brought it to life with technology that will help golfers at every level of the game. SM6 really is the total package.”

“The detail and precision that’s gone into SM6 is off the charts,” Aaron Dill said. “We’ve taken everything into consideration while really focusing in on the CG. This is technology that you can actually see on the wedge – technology that tour players are raving about because it is helping them control their trajectory, hit their number more consistently and ultimately score better.”

INSTANT TOUR ADOPTION: Vokey SM6 became the most played wedge model on the PGA Tour the first week it was available to players at the Shriners Hospital for Children Open in October, with a total of 74 new SM6 models immediately put in play. SM6 has remained the #1 model in play each successive week, with the total of SM6 models at last week’s CareerBuilder Challenge reaching 138.

Jordan Spieth opened 2016 with a win at the Hyundai Tournament of Champions carrying four SM6 wedges. Spieth first put the SM6’s in play in November at the WGC-HSBC Champions event. Jason Dufner, who switched to three SM6 models at the Shriners Hospital for Children Open, won the CareerBuilder Challenge.

ADVANCED PERSONALIZATION AND CUSTOM OPTIONS: SM6 wedges can be custom ordered with a wide range of specifications and personalization, including an industry-leading selection of shafts, grips, shaft bands, ferrules, stamping and paint fill. For a complete list of personalization and custom options, visit Vokey.com.

ON THE WEB: www.vokey.com
Posted by Blogger at 1:21 PM