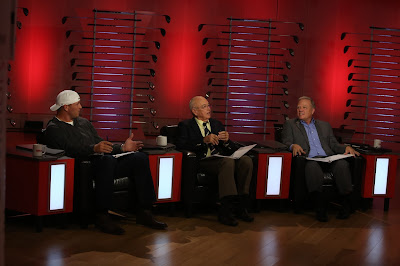 (CHICAGO) – Wilson Golf announced today the panel of judges and host for Driver vs. Driver, a first-of-its-kind television series that is currently in production and debuting on Golf Channel in Fall 2016.Leading the four-person panel is former National Football League linebacker Brian Urlacher, an avid golfer with a single-digit handicap and a self-professed golf equipment “junkie.” Urlacher retired in 2013 after a 13-year career in the NFL, and now he has turned his competitive focus to the golf course. Alongside Urlacher will be Kevin Streelman, a two-time PGA TOUR winner and Wilson Advisory Staff Member; Frank Thomas, former USGA Technical Director with more than 40 years of golf technology and equipment experience; and Tim Clarke, President of Wilson Golf.

Driver vs. Driver will follow the trials and tribulations that aspiring golf equipment designers face as their golf driver ideas and concepts are evaluated, critiqued, refined and tested. The winning design team ultimately will earn $500,000 and the opportunity to have their driver design sold at retail under the Wilson Staff name. The series also will take viewers behind the scenes as Wilson Labs engineers and designers partner with the contestants to take their ideas through prototyping and rigorous testing to refine the concepts until a winner is determined. The winning  driver concept and viable driver will become part of the Wilson Golf line of products in 2017.

“When choosing the panel of judges, we knew we had to have a good mix of professionals that brought a relevant, yet different perspective to the process - from the everyday golfer, to the tour player to an industry expert, “said Clarke. “I also wanted to play a role on the panel because it will be up to our team at Wilson to bring the club to consumers. We’re excited to work with these judges to bring an exciting infusion of innovation to the market.”

“I really love to play this game, and personally enjoy learning about new equipment. When Wilson offered me a position as a judge, I jumped at the opportunity,” said Urlacher. “This is a side of golf I would have never been able to see, and it’s fascinating to see how equipment is developed first-hand. I’m thrilled to be part of the process of selecting an inventor to realize their dream of designing a club that will be sold across the country.”

Production for Driver vs. Driver began in the Fall of 2015 and will continue through the summer. The series is being produced by Golf Channel, whose portfolio of original productions include interview series Feherty hosted by Emmy-nominated sports personality David Feherty, high-quality instruction shows The Golf Fix, School of Golf, Golf Channel Academy and Playing Lessons and a slate of award- winning documentaries and films.

A first look preview of Driver vs. Driver will air on Golf Channel’s Morning Drive live from the PGA Merchandise Show in Orlando, Florida on January 28. For more information, log on to www.wilson.com/drivervsdriver.
Posted by Blogger at 10:34 AM