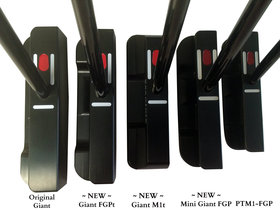 (Franklin, TN) - SeeMore has launched three new line extensions to the eye catching GIANT FGP that was introduced in 2015.  These include the Giant FGPt, the GIANT m1t, and the new mini GIANT.

Jim Grundberg, SeeMore CEO, offered that, “these exciting new GIANT series models expand the concept of bigger is better in a SeeMore blade design putter.  They offer several shapes and sizes that will give any golfer the benefit of the most forgiving and functional design putter they have ever used, whether they have previously preferred blade or mallet style putters.  For most golfers one of these new GIANT series putters can become a game changer.”  SeeMore has taken the proven design of the FGP design to an entirely new level.

The FGP design is SeeMore’s most recognizable product, the flagship shape for the brand and the winning putter of 3 Major Championships and over 20 Tour victories. The SeeMore FGP putter was behind the golf world’s #1 golf shot of 2015 - the 30-foot putt on the 18th hole in the final round at St. Andrews leading to an OPEN Championship for the ages.  The memorable bomb at 18 was the signature moment in what has been called the greatest final round putting performance in the history of St. Andrews, where the winner passed 14 players on the final day with 10 birdies in 22 holes including a playoff.

What are the main benefits of the GIANT Series expansion? 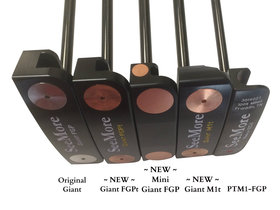 According to Ted Gallina, SeeMore Director of Tour Operations, “the GIANT FGP putter has been amazingly well received at all levels, and with acceptance comes even more interest in line extensions, and of course special needs and desires driven by the tour and by avid players. The new GIANT series putters have an expanded range of visual appeal to all golfers and provide the variety that serious golfers want when being custom fit for a new putter.”

Cody Hale, SeeMore Tour Representative and SAM PuttLab technician, added that “extensive player and SAM PuttLab testing over the past year, with all of the SeeMore GIANT series models, has clearly proven that golfers find it easier to align the GIANT putter face to the target line and to hit putt after putt with greater directional and distance consistency, leading to measurably improved putting statistics”.

The GIANT putters are more forgiving than any of the leading blades or mallets on the market, with a significantly higher moment of inertia based on the size of the blade and the extreme heel/toe weighting, providing stability and feel that is beyond anything SeeMore or any other putter brand has ever offered.

The GIANT series putters still maintain the same great dynamic benefit of the original FGP, that of being Face Balanced at Impact or Balanced and Square to the stroke plane.  This means that the putter’s natural forces always act to keep the putter on a perfect stroke path and return the face to square at impact, leading to more putts on line.  The GIANT putters are more forgiving during the stroke (many testers say the putter literally swings itself on the perfect plane), and more stable at impact, meaning more made putts.

Here are some technical details of the GIANT FGP and the new members of the SeeMore GIANT Series.
Original GIANT: The length is 5.75 inches, flange depth is 1.6 inches, and face height is 1.4 inches. The flange depth is relatively the same as the diameter of a golf ball, and the height of this deep face version means the equator of the ball meets the equator of the milled face to impart a great roll with great feel.  Milled Aluminum head weight 365 grams including 2 stainless steel sole weights, which may be adjusted after market to copper or tungsten for weight adjustments. Retail price is $250.

New GIANT FGPt: The length is 5.6 inches, flange depth is 1.6 inches, and face height is 1.2 inches. This new option is slightly smaller in terms of length and height than the Original GIANT, to appeal to a wider range of personal preferences in terms of confidence at set up. Milled Aluminum head weight is 355 grams including 2 copper sole weights, which may be adjusted after market to stainless or tungsten for weight adjustments. Retail price is $295.

New GIANT m1t: The length is 5.3 inches, flange depth is 1.6 inches, and face height is 1.2 inches. This new option provides a more classic heel toe shape to appeal to a wider range of personal preferences in terms of confidence at set up. Milled Aluminum head weight is 355 grams including 2 copper sole weights, which may be adjusted after market to stainless or tungsten for weight adjustments. Retail price is $295.

New Mini GIANT FGP: The length is 5.2 inches, flange depth is 1.4 inches, and face height is 1.1 inches. The smallest of the GIANT series, the Mini GIANT is created using 4 sets of non adjustable copper weights in the extreme toe and heel section as well as the perimeter of the sole, for the ultimate MOI to size ratio.  Milled Aluminum head weight is 350 grams.  Retail price is $395.

The entire Giant Series will be available beginning in February 2016. Any member of the GIANT series may be special ordered by any golfer from any golf pro shop, as with any SeeMore putter.

Grundberg added “the expanded line of GIANT series putters takes the concept of a game improvement putter to an entirely new level. The GIANT putters offer golfers of all skill levels incredible feel, forgiveness, alignment, and an improved putting stroke.  The only way to believe the benefits of a SeeMore GIANT putter is to try one.”

RST Technology - SeeMore’s patented RST, known by a visible gun sight on the top line, allows the golfer to set up the putter perfectly each and every time in relation to the intended target line. This is accomplished by lining up the black bottom portion of the shaft between two white lines and covering a signature red dot on the heel of the top line.  The process is like locking radar onto a target.  The two parallel white sight lines frame the shaft and serve as an indicator that the golfer is in perfect position to make a consistent and reliable stroke.

SeeMore Facts - SeeMore originally became recognized when Payne Stewart won the 1999 U.S. Open playing a SeeMore putter in the greatest final round putting performance in US Open History.  The brand was re-launched in 2007, and immediately regained worldwide prominence as Zach Johnson used a SeeMore FGP to win the 2007 Masters. Zach Johnson’s historic win at the 2015 Open Championship now becomes the 3d leg of the “SeeMore Slam.”

SeeMore’s website at www.seemore.com has many new features about SeeMore’s remarkable legacy, technology, and tour success. SeeMore putters are custom made in Franklin, TN.
Posted by Blogger at 9:47 AM