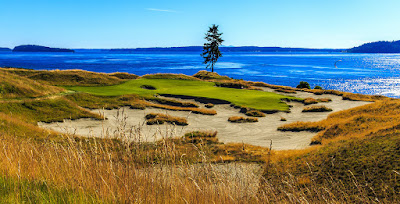 (University Place, Wash.) – Following a historic year in which Chambers Bay hosted the first U.S. Open in the Pacific Northwest, the course recently released statistics that illustrate the overwhelming marketing benefits of hosting our National Championship. As a result of forty hours of television coverage that reached nearly 35 million viewers, Chambers Bay saw a significant shift in the geographic origin of their customers. In the months following the Championship, the percentage of rounds played by golfers from outside the state of Washington reached 41%, more than double the historical average.

Compared to 2014, in which the golf course welcomed visitors from 12 states and Canada, Chambers Bay dramatically expanded its geographic reach in 2015 by hosting golfers from 45 states and 13 countries, cementing this Pierce County asset as a tourism destination.

This news comes on the heels of the USGA’s announcement of the economic impact from the 2015 U.S. Open, which brought a $134 million dollar infusion to the region.

“The overarching theme when developing Chambers Bay was to build a course that would attract tourism and benefit the fiscal health of the county,” said Pierce County Executive Pat McCarthy. “All economic reports validate that the 2015 U.S. Open was a tremendous success and should remain a source of pride for the entire Pacific Northwest.”

“You can’t put a price tag on the value of the exposure to a television audience of that size. The beauty of Chambers Bay and Pierce County were on display for the world to see,” said KemperSports general manager Matt Allen. “We look forward to maintaining the momentum in the upcoming golf season.”

KemperSports has managed Chambers Bay on behalf of Pierce County since the golf course opened in 2007.