(Warwick, RI) - BioMech Golf Equipment—a professional company that designs and builds sports equipment based on the body’s physiology and physics—has partnered with the American Parkinson Disease Association (APDA) to reengage golfers and enhance the joy of the game to players impacted by Parkinson’s. 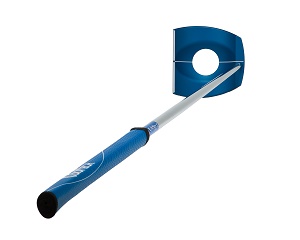 Parkinson’s disease (PD) is a progressive neurological condition that is characterized by motor problems including slowness of movement, rigidity, and tremor.  BioMech Golf’s first product, the AccuLock ACE putter, has already demonstrated benefits to golfers with Parkinson’s.  By virtue of its contact against the golfer’s leading forearm, the ACE facilitates a simpler, natural core putting motion. An upright, balanced stance helps to control and stabilize the stroke, thus eliminating unwanted and uncontrollable motion in the small muscles of the hands, wrists, and arms. As a result, the ACE gives Parkinsonians and all golfers improved putting control.

Inspired by the benefits of the AccuLock ACE putter for people with PD, BioMech has partnered with APDA and will donate $5 from the sale of every ACE putter in 2016. BioMech CEO Dr. Frank Fornari had this to say about the partnership, “Being part of APDA’s efforts to support Parkinson’s patients and their families was unquestionably the right choice for BioMech.” Fornari emphasized that “for me the game of golf is both a health issue and a biological process that changes as your body changes. At BioMech, we are working to help golfers adapt to changes from aging, injury, disease, behavior, schedule, etc. and continue to play and enjoy the game—and life.” ACE putters are available at www.biomechsports.com and in select stores nationwide.

“My parkinsonian symptoms have made it increasingly more difficult for me to play golf. The design of this putter has given me improved functionality and has allowed me to putt with better consistency and accuracy. The position of the putter's shaft against my forearm provides stability and reduces my excessive movement. I am now able to get back out on the golf course and play the game I love,” said Jason Tracy, an avid golfer living with Parkinson's disease for 11 years.

“At APDA we work hard to provide programs, services, and resources to facilitate a better quality of life for the Parkinson's community, and the AccuLock ACE putter is one more step in that direction,” states Leslie A. Chambers, APDA President and CEO. “We are excited for people with Parkinson’s to be able to get back to the golf game they enjoy and we’re thankful to BioMech for the funds that will help us serve even more people with this disease.”

The collaboration between BioMech and the APDA will enrich players’ golf experience, raise awareness and disseminate information regarding Parkinson’s Disease, promote physical activity and generate funds supporting the mission of the APDA. Recognizing the importance of physical activity, BioMech founders Drs. Fornari and Gwen Bauer bring more than 60 years of combined experience in biotechnology and research to this partnership.

Learn more about BioMech and its products on the Company's web site: www.biomechsports.com.

The American Parkinson Disease Association (APDA) was founded in 1961 with the dual purpose to Ease the Burden - Find the Cure for Parkinson's disease. In that time, APDA has raised and invested more than $87 million to fund research, patient services and education, and elevate public awareness. As the country's largest Parkinson's grassroots organization, APDA aims to Ease the Burden for the more than one million Americans with Parkinson's disease and their families through a nationwide network of Chapters, Information and Referral (I&R) Centers, and support groups. APDA pursues its efforts to Find the Cure by funding Centers for Advanced Research and awarding grants to fund the most promising research toward discovering the cause(s) and finding the cure for Parkinson's disease. Learn more at www.apdaparkinson.org.
Posted by Blogger at 10:09 AM