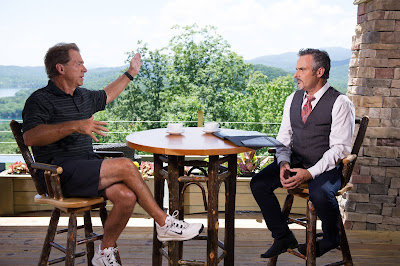 (ORLANDO, Fla.) – Two of the biggest coaching icons in NCAA football history and two Ryder Cup captains are set to sit down with Emmy-nominated David Feherty – one of the most recognizable and unique personalities in sports and newly announced NBC Sports golf analyst – for wide-ranging interviews on upcoming episodes of Feherty, Golf Channel’s primetime interview series, including a Ryder Cup One-Year-Out Feherty Live special later this month.

These new episodes of Feherty come on the heels of NBC Sports Group’s announcement that Feherty will make NBCUniversal his exclusive media home, which will include adding Feherty to NBC’s golf tournament coverage team starting in 2016, an extension of his award-winning series Feherty on Golf Channel and a slate of new ventures highlighted by a Universal Television development deal.

Feherty – Steve Spurrier, Sept. 23, 9 p.m. ET
On Wednesday, Sept. 23 at 9 p.m. ET, the “head ball coach” – South Carolina head football coach Steve Spurrier – invites Feherty to his home in Crescent Beach, Fla. Spurrier reveals a side rarely seen in the public eye when he discusses with Feherty the lessons he’s learned from nearly four decades of coaching at the highest level, balancing work and family and his passion for the game of golf. Feherty also gives the former Heisman Trophy winner lessons for improving his game on the golf course, and the two discuss the art of throwing a visor.

Feherty Live – “An Evening With the Captains,” Sept. 29, 9 p.m. ET
Feherty will unleash his wit and unconventional interview style that has earned his show critical acclaim when the PGA of America celebrates one-year-out from the 2016 Ryder Cup with a special Feherty Live stage show from the historic Orpheum Theater in Minneapolis, Minn. Feherty Live – An Evening With The Captains, airing as a one-hour special on Tuesday, Sept. 29 at 9 p.m. ET, will feature conversations with U.S. Ryder Cup captain Davis Love III and European Ryder Cup captain Darren Clarke. Viewers also will get a behind-the-scenes preview of the 2016 Ryder Cup, taking place at Hazeltine National Golf Club in Chaska, Minn.

Feherty – Nick Saban, Sept. 30, 9 p.m. ET
Feherty travels to Lake Burton in the North Georgia mountains for a sit-down interview with Spurrier’s SEC counterpart, Alabama head football coach Nick Saban. Saban opens up to Feherty on his football coaching philosophy and how he applies life lessons learned from playing the game of golf to molding and shaping his student athletes both on and off the field. They also discuss the influence of Saban’s father, his early career aspiration to be a car dealer, the life lessons learned from Bill Belichick and his difficult two seasons as coach of the Miami Dolphins. Away from the interview, Feherty coaches “The Coach” on the golf course and spends some relaxing time with Saban on his boat and at his Lake Burton summer house.
Posted by Blogger at 11:11 AM