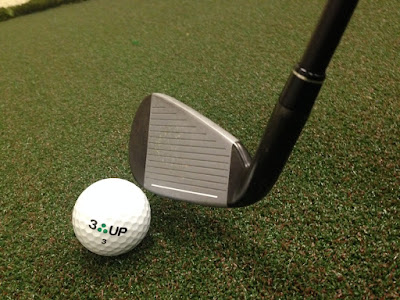 I’m what’s jokingly referred to as a “Cafeteria Catholic.” I pick and choose what I determine to be acceptable sins. By the letter of the law, I’m probably going to Hell. Perhaps Pope Francis can save my soul while he’s here in the United States.

I would guess that many golfers would fall into a similar category - playing by the rules, but maybe bending some of the less-egregious infractions. For instance, I’ve benefitted from the “breakfast ball” ... taking a second tee shot on the opening hole if the first could be lost (a provisional without penalty, if you will).

One thing I don’t do is roll the ball in the fairway. That is to say, play winter rules throughout the year by improving your lie.

I asked members of the Google+ Golf Community for their thoughts: Do you roll your ball in the fairway?﻿
Yes - 20%
No - 80%

After clarifying what I meant by “roll your ball” (I forget we’re talking to an international crowd that uses multiple terms for the same thing), the comments came pouring in.

+Ricky Potts has changed his ways: “I used to. No more. I play the ball down regardless where I am. Sucks sometimes, but hey ... That's golf. Now, if my playing partners want to roll it, fine. +Matt Rust, do you roll the ball? I don't even know ...”

+Matt Rust responded: “+Ricky Potts I try not to, usually do it if there is some grave injustice or if my score and/or round has already gone to hell.﻿”

In step with Potts, but counter to Rust ... My best birdie last year came from an ideal drive in the fairway that found an unfilled divot. I managed to hit the green and roll in the birdie putt from there. Very satisfying, especially with it coming in a team match play event. Both opponents were inside my putt, but missed, giving my partner and I the hole.﻿

Sometimes, location plays a role in how players view this rule.

+james bui (poopdoggydogg) said, “I'll lift and clean if it's winter rules and muddy. I live in the NW, so its not uncommon. I've lost drives in the fairway because they plugged so bad I couldn't find it. But yeah, lift and clean only when appropriate ... winter rules, GUR ... Otherwise, play as it lies. As far as fluffing, we have had a dry summer here, and I must say, I love tight, hardpan fairways ... never thought I would. But shots are so crisp from hardpan.﻿

+Jeremy Black, who said he “plays it down” everywhere, agreed with the feeling. “Nothing like picking it clean,” Black said.

+Darrell Williams lives in the American Heartland, but thinks along the lines of Bui. “I do, it depends on course conditions. Here in Kansas it will dry out bad and some courses can’t water like they want and fairways dry out and its a bitch to hit off HARD PAN all day when you have tennis elbow in both elbows, so I like to have a little bit of grass for a bit of CUSHION at impact!

“But these scores I will not put into GHIN, though,” he added.

Quality of course factors into the decision for +skpknight: “On certain courses, such as municipal courses where the fairways are not as lush, we sometimes play "winter rules" by improving your lie no closer to the hole. On your better private and semi private courses, you play as it lies unless you are in low lying areas with casual water.﻿”

Many responded with a simple “play it as it lies” comment, but +Luis Zapata added some gusto to his thought. “Sorry, but the only way to do that is if winter rule is in effect and even then I question if you should do it. The rule is clear "play as it lies," so is guess if they where thinking about the integrity of the fairway when they wrote the rule, I guess not. Play as it lies!﻿”

Lastly, I think +Craig Brush may be Catholic. He responded with a self-punishing thought: “I know it's allowed, but i don't see the point of it. ﻿It's supposed to be a long walk gone bad.”

Mark Twain once said “Golf is a good walk spoiled” and John Feinstein wrote a book by the same name. Perhaps Brush may be onto something.
Posted by Blogger at 1:46 PM