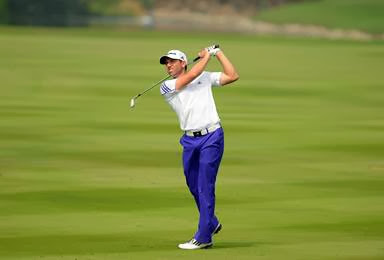 Playing against a strong field that included Justin Rose and Henrik Stenson, Sergio kept his foot on the gas in the final round to post a 22-under 266. Sergio hit blistering drives off the tee with his SLDR and became the first player to win with the company’s new Tour Preferred MC irons. Throughout the tournament, Garcia wore the adizero Tour, adidas Golf’s top-selling model globally and the lightest tour performance shoe the company has ever created.

The not yet released Tour Preferred MC irons combine a player’s shape with a shallow “muscle cavity” to boost MOI, creating an unparalleled blend of beauty, feel, workability and stability. The 3 through 7-irons incorporate TaylorMade’s renowned Speed Pocket technology to promote increased ball speed in the lower portion of the clubface for more consistent ball speed and launch conditions across the entire face.

Sergio’s most memorable shot with his new iron was an ace at the 198-yard, par-3 eighth hole during Friday’s second round.

I am thankful to this blog for assisting me. I added some specified clues which are really important for me to use them in my writing skill. Really helpful stuff made by this blog.
รองเท้าฟุตบอล