NGA TOUR, once again, provides players the most opportunity to move up in-season 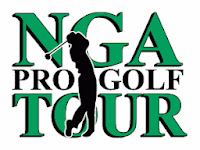 “This past season was another great one for the NGA Tour,” said Robin L. Waters, NGA Tour president. “We were able to secure seven Major event exemptions including two on the number one tour in the world. Our ultimate goal is to develop and prepare our players to be successful at golf’s highest levels and what better way than providing them the opportunity to compete against some of the best players in the world. We will continue to strive to get as many opportunities as we can for our players to help them achieve their goals and dreams of playing on the PGA and Web.com tours.”

The NGA Tour has a history of players moving up to golf’s top tours and more and more seem to be doing the job “in-season”. In 2011 Russell Knox and Ted Potter Jr. started the season as NGA Tour Pro Series members and would move up in-season after wins at the Chiquita Classic and the South Georgia Classic. Fellow NGAers Josh Broadaway, Billy Hurley, Matt Hendrix, Will Wilcox, and Casey Wittenberg also made the jump in-season in 2011. Matt Harmon is another example of an NGA member moving up in-season. The 2010 NGA Tour money title winner was awarded the NGA Tour event exemption into the 2012 TPC Stonebrae Championship. There he tied for 2nd earning exempt status for the remainder of the year. This year saw 2013 NGA Tour Pro Series members Blayne Barber and Peter Malnati, both with no status to start the year, and Nick Rousey and Zack Sucher, both with conditional status, all move up after having success in-season. Malnati would go on to win the News Sentinel Open, earning his membership on golf’s top tour for the 2013-14 season, where he has already had an 11th place finish in the OHL Classic.

Here is a look at the three events who have already granted the NGA Tour event exemptions for the upcoming 2014 season:

The News Sentinel Open has long been a stepping stone for former NGA Tour players in realizing their dream of playing on golf’s top tour. In addition to this year’s winner, Malnati, past champions include NGA Tour alumni Darron Stiles, Vaughn Taylor, Heath Slocum, Robin Freeman, Eric Johnson, Tim Conley and Chris Kirk. Fox Den Country Club has been the host venue in Knoxville every year since 1999. NGA Tour member Derek Rende secured the NGA Tour exemption into the News Sentinel Open this past season where he made the cut and finished tied for 60th, the fourth straight year the NGA Tour exemption winner has made the cut in the event. This will be the 5th consecutive year the NGA Tour has been awarded an unrestricted exemption into the event. The News Sentinel Open is scheduled to take place August 11-17, 2014.

The NGA Tour, the #3 men’s professional golf tour in the US and #1 most recommended developmental tour by top touring professionals, is currently taking memberships for the upcoming 2014 NGA Tour Pro Series season. Anyone wishing to join the NGA Tour for the upcoming 2014 season may do so by contacting the NGA Tour Offices. For more information on the NGA or the NGA Pro Golf Tour, please visit www.NGATOUR.com or contact Tour Offices at (800) 992-8748.
Posted by Blogger at 11:14 AM