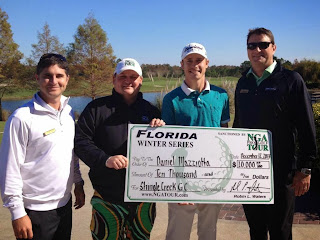 (Orlando, Fla.) - When Daniel Mazziotta started off this season's NGA Winter Series with a missed cut at the Harmony Golf Preserve, he had to wonder if it was a sign of things to come. Only the signs could not have foretold a streak that would see the former Florida Gulf Coast University star go on to post four straight top 5 finishes including a runner up at MetroWest and culminating with a win this week after shooting a three day total 15-under par at the vaunted Shingle Creek Resort in Orlando. The event at Shingle Creek was held Tuesday December 10th through Thursday December 12th, 2013.

Mazziotta, out of Fort Myers, Fla., has put together a four tournament run that has seen him post ten out of twelve rounds in the 60's with his worst score of 73 coming in the first event. Not only have his rounds been impressive over the four tournament run but his total strokes have steadily decreased as well going from 208 to 205 to 204 and finally 201 for the win this week. However his final round of the event would not come without it's struggles.

"I got off to a steady start like I had the past few days and was playing some really good golf," explained Mazziotta, "and then made the one bad swing of the day."

The one bad swing put Mazziotta into a hazard on 13, leading to his only double bogey of the tournament and allowing former Austin Peay golf star, Dustin Korte out of Metropolis, Ill., to get to within a stroke. Mazziotta quickly followed the double up with a birdie on the next hole and matched Korte's birdie on 16 to maintain a 2 shot lead heading into the 18th and final hole. Korte would put the pressure on by birding the 18th but Mazziotta stood strong and made par for his first win of the season.

"I have to thank my friends and family, and Victor Gallo and Ryan Nivakoff. They are the two guys who have resurrected my year," stated Mazziotta after the win.

The NGA Tour would like to thank the staff and everyone at Shingle Creek Golf Club and Resort for conducting another great professional event! The NGA Tour Winter Series picks back up at the Disney Magnolia Golf Course in Orlando, Fla. next week with events on Monday December 16th and Tuesday December 17th through Thursday December 19th.

For more information on the NGA Pro Golf Tour visit www.ngatour.com or contact Joy Johnson (800-992-8748 or email Joy@ngatour.com).
Posted by Blogger at 11:09 AM