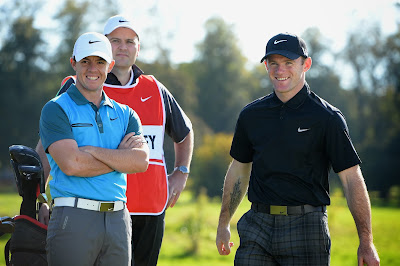 McIlroy and Rooney play golf in new Nike film, "Straight Down the Middle"

(BEAVERTON, Ore.) – Nike introduces “Straight Down the Middle,” a new film that features a lighthearted golf match between iconic athletes Rory McIlroy and Wayne Rooney to celebrate the launch of the new Ordem football, its most innovative, technologically advanced and aerodynamically tuned ball to date. In the film, McIlroy and Rooney exchange impressive shots over the course of 18 holes – Rory with his new Nike VRS Covert 2.0 driver and Wayne with the new Nike Ordem football.

The film features a series of playful scenarios with a special guest appearance by Brasilian legend Ronaldo, who provides Rooney with a critical assist towards the end of Rooney’s round. Rooney and Rory have long been fans of each others game, and a true comradeship developed over the course of filming as they exchanged tips on golf and football.

View the film and download images here, and check out the behind-the-scenes footage.

I'm a big fan of Rooney.. Love to see him with Rory in Golf course.. both looking awesome in Nike Golf shirts and caps.. I am finding this shirt style to buy here..
http://www.apparelnbags.com/nike-golf/index.htm