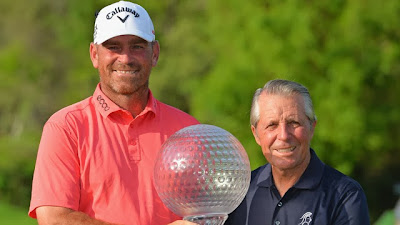 Showcasing the ECCO logo on his collar, Bjørn fired a final-round 65 and bested a star-studded field to claim his 15th career European Tour title. The 42-year-old Dane carded a remarkable two eagles during his closing nine holes to finish at 20-under-par.

"They were two big moments," said Bjørn, who moved into first place in the Race to Dubai. "Obviously, having two eagles on the back nine on a Sunday doesn't happen very often. The shot into 14 was a bit fortunate, but that's what happens when you win golf tournaments, I guess."

The victory comes on the heels of a 2013 season that yielded a win at the Omega European Masters and six other top-10s, notably back-to-back seconds in June at the Lyoness Open and BMW International Open.

"Thomas closed out 2013 in strong fashion and is off to a hot start this season," says Jesper Thuen, Global Sponsorship, PR & Event Manager - ECCO Golf. "He's on top of his game at the moment and we hope this is a glimpse of things to come for him in 2014."