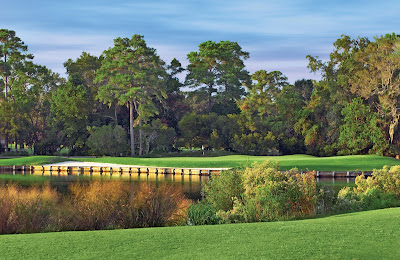 (HILTON HEAD ISLAND, S.C.) — “We are tied to the ocean,” President John F. Kennedy once said. “And when we go back to the sea ... we are going back from whence we came.”

Apparently, President Kennedy had it right — particularly when it comes to golf in South Carolina. Of the 30 golf courses selected in the 2013 South Carolina Golf Course Ratings Panel’s biennial voting on the “Best You Can Play” in South Carolina, a whopping 26 are located along the Atlantic seaboard.

It was another president, Bill Clinton, who annually began visiting Palmetto Dunes Oceanfront Resort on Hilton Head Island during the late 1990s. President Clinton’s favorite of the resort’s three outstanding golf courses — the Arthur Hills Course — is once again a mainstay among the South Carolina Top 30 “Best You Can Play.”

The Arthur Hills Course at Palmetto Dunes Oceanfront Resort, where collegiate stars like Tiger Woods and Phil Mickelson honed their talents, takes full advantage of the natural beauty of this South Carolina sea island. Named the 2009 Course of the Year by the South Carolina Golf Course Owners Association, this spectacular layout represents a careful blend of beauty and challenge. Stands of palmetto trees line the graceful fairways.

Built on a series of rolling dunes, the Arthur Hills Course presents many opportunities for off-balance lies, while ocean breezes add to the challenge. Ten holes on the water further encourage precision play.

Fodor’s Golf Digest ranks the Arthur Hills layout at 4.5 stars. Additionally, Arthur Hills was named a selected course by Golf Digest in its ranking of Hilton Head as No. 9 on the list of America’s Best Buddies Trip Destinations for 2013. The course plays 6,651 yards from the back tees.

“We are thrilled that the experts have once again recognized the Arthur Hills Course as one of the most popular layouts in South Carolina,” said Brad Marra, Assistant Vice President of Resort Operations. “We offer three golf courses that provide our guests a wide variety of looks and challenges, and we are proud of them all. It is pleasing to know that the game’s connoisseurs agree.”

The South Carolina Golf Course Ratings Panel announced its 2013 “Best You Can Play” at its annual spring meeting Saturday night at the Callawassie Island Club in Okatie, S.C. The panel consists of approximately 125 members representing all facets of the game and all levels of playing abilities.

Ratings are conducted by a closed vote with results tabulated once voting has closed. The group’s objective is to promote excellence in the state’s golf course design and operation through competitive ranking, education and public advocacy.

The “Best 50” courses, public or private, are chosen in even-numbered years and the “Best You Can Play” is announced in odd-numbered years. Criteria used in judging include, routing, variety, strategy, equity, memorability, aesthetics and the golfer’s experience.

Other than the No. 1 course — in 2013 it was the Kiawah Island Ocean Course, host site of the 2012 PGA Championship — the list of 30 is alphabetical with no numerical ranking.

“There are so many outstanding courses that you’re really splitting hairs in the voting,” Michael Whitaker, the panel’s executive director, said in discussing the rankings. “When you think about the number of really good golf courses in this state and reduce that number to 30, it’s a daunting task.

“Some of the older courses have stood the test of time, some have improved with some relative small tweaks and others that have undergone renovation or restoration to their original design features have increased in quality.”

Information on previous rankings can be found on the organization’s website www.SCGolfPanel.org.