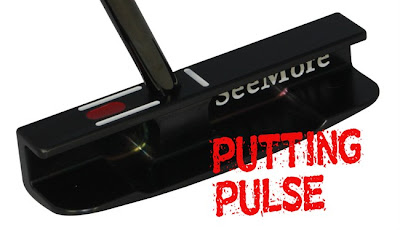 It’s not news to you that tour players are looking to gain confidence in putting like the rest of the golfing world.  While at the Honda Classic last week, I watched some other putter companies emphasize the importance of alignment by stating that certain designs are the solution to great alignment.  From different manufacturers, you may be seeing promotions containing a variety of different messages. How do you communicate the keys to great alignment?

I’d love to receive your feedback on this message that I communicate to customers. Perfect alignment down the target-line accurately synchronizes the putter face, the eyes and the rest of the body. SeeMore’s patented RifleScope Technlology (RST) makes it the only putter in the world that helps reinforce that complete system of alignment. Through using a SeeMore Putter, you will build confidence by consistently applying a natural system in putting as RST serves as an indicator to reinforce perfect alignment on every putt. All players (including a “feel player") need a simple system for game improvement. Golfers are often skipping simple steps in their development, and here is the simple formula for you to build confidence in your alignment.

Theory + Application + Belief = Confidence
The definition of confidence is the feeling or belief that one can rely on someone or something.  It’s the state of feeling certain about the truth of something.

Like many things in life, confidence in golf comes from belief in the application of a theory. Application and belief are essential components in putting. Golfers often buy into a theory and expect confidence, but do not gain it because they were not taught to reinforce the correct application.  And who can believe in anything without application?

I challenge you to ask these questions to players.
* Do you have a theory or system for putting that you believe in?
* Why do you believe in it?
* How do you consistently apply it?

SeeMore Putter Institute (SPi) team members are sharing the truth that SeeMore is the answer for golfers to follow each essential element to build confidence in putting.

“The most wonderful part about the SeeMore Putter Line is the fact that IT IS THE ONLY CLUB ON THE MARKET that promotes the “THEORY” and the “APPLICATION” of the theory…which blend nicely into the SeeMore Putting System.  To elaborate, we all know what the “THEORY” is.  It is getting our body, arms and head in the correct position to build a consistent stance, posture, alignment, grip and ball position to make a repeatable putting stroke.  The “APPLICATION” is just that, the Riflescope Technology.  It is how to apply all that we teach and know about our set up to be successful.”PGA tour winners continue to utilize this system, like Vaughn Taylor who is featured in this Golfweek.com article that was released last week -   Vaughn Taylor Begins To Find His Way Back On Tour.

Vaughn finished tied for 25th in the grueling, windy conditions.  I watched Vaughn utilize the SeeMore triangulator for hours on the practice green.  You can learn more about the triangulator at SeeMore.com under the technology page.