(CHICAGO) – Kevin Streelman used his Wilson Staff FG Tour V2 Irons (4-9) in the Tampa Bay Championship this week to secure his career first PGA Tour victory. His fearless finish on the closing holes of the Copperhead Course at Innisbrook Resort in Florida proved how confident he was in his game and his intent to capture his first triumph. 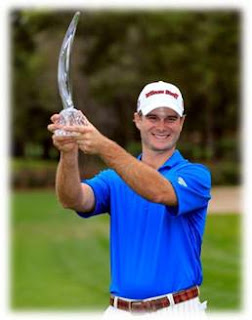 His precise iron play allowed him to hit 84% greens in regulation, leading him to drain a total of 19 birdies throughout the week. Streelman exalted his position on the leaderboard after his second and third rounds; his impressive 6-under par finish in round three’s “moving day” promoted him to a first place tie entering the final round.

His FG Tour V2 5-iron fade into a tight pin position on hole number 13 to grab the lead at 9-under par foreshadowed how mentally bulletproof he would be in his closing holes. “It was the best shot of my life,” commented Streelman. He then stuffed it to 17 feet with his 4-iron on the 17th hole to help him birdie and seize a comfortable 2-stroke lead.

“These new Wilson Staff irons have been awesome,” Streelman stated after his par finish on 18. “I’ve been hitting it solid all year; it’s been amazing.” Wilson Staff’s FG Tour V2 Irons feature mass placed behind the impact zone for a traditional muscleback feel surrounded by a built-in cavity to provide forgiveness for the game’s better players.

“The level of commitment to success that Kevin embodies makes us confident in his ability to win more in the near future,” said Wilson Golf General Manager Tim Clarke. “This is the breakthrough he has been craving; Kevin is here to stay.”