Nothing Could Be Finer: OBX's Kilmarlic Cracks Golfweek's Best Courses You Can Play in North Carolina List 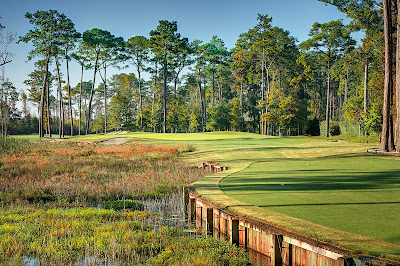 (OUTER BANKS, N.C.) — North Carolina’s fabled Outer Banks have earned the reputation of a family-first destination with enough sand, sun and saltwater to stir even the calmest of souls. In recent years, however, OBX has transformed itself into a true golf destination offering an array of courses more closely tied to nature’s coastal elements than most along the East Coast.

The national golf community is now taking notice, as Kilmarlic Golf Club in Powells Point, N.C., earned the No. 14 spot among Golfweek’s 2013 “Best Courses That You Can Play” in North Carolina. To build Golfweek’s list, an experienced team of more than 725 evaluators rated each public layout on the basis of 10 criteria, including routing, conditioning, variety and memorability of holes. The result is an average of scores that dictate a course’s overall ranking. The number of courses per state varies on this list based on the course supply, population and level of play in each state.

“This prestigious Golfweek honor means a lot to us,” said Kilmarlic’s long-time Director of Golf Bryan Sullivan, a former North-South Amateur champion and an All-American at the University of North Carolina with teammate Davis Love III. “We believe we have something pretty special here at Kilmarlic. It is nice to know the most knowledgeable golf experts in the world agree.”

Kilmarlic is a popular Tom Steele design nestled along the marshland of the Albemarle Sound and host course for both the 2004 and 2009 North Carolina Opens. For the past three years during the autumn months, Kilmarlic also hosted the Old Dominion/Outer Banks collegiate championship.

“Kilmarlic has tremendous par-5s and par-3s — great risk-reward,” said veteran ODU head coach Murray Rudisill. “It’s not a seaside, links-type of course. It’s more of a traditional course in a nature environment. The facilities are beautiful and it’s always in pristine condition.”

“Kilmarlic is an enjoyable course with a little bit of everything,” added Georgia head coach Chris Haack after leading the two-time national champion Bulldogs to the 2011 tourney title. “It gets really exciting and rather stressful for a coach on the back nine with three par-5s, a drivable par-4 and trouble left and right on most every hole. Anything can happen with birdies and bogeys lurking on every swing.”

Locale has been a big part of Kilmarlic’s success since its debut in 2002. The club is just five miles west of the bridge that connects the mainland to the Outer Banks. “In 10 minutes,” Sullivan likes to say, “I can have my feet in the Atlantic.” Adding to the golf experience, the Club Cottage at Kilmarlic offers four comfortable bedroom suites, a large adjoining living area and fully equipped kitchen, and is picturesquely perched adjacent to the clubhouse, practice area, 1st tee box and 18th green.

Learn more about Kilmarlic and the OBX golf experience at www.PlayOBXGolf.com or 800-916-6244. Visit www.Golfweek.com/GolfweeksBest to view the complete list of Golfweek’s Best Courses You Can Play.