(MYRTLE BEACH, S.C.) — The 3,300+ players who have already registered for this year’s World Amateur Handicap Championship will have the opportunity to enjoy an enhanced experience at the World’s Largest 19th Hole with the addition of the Blade & Bow VIP Lounge. 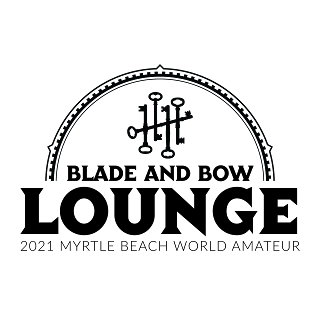 In addition to enjoying free food and drinks, live entertainment and celebrity guests at the 19th Hole, players who join the Blade & Bow VIP Lounge will have access to:

The Blade & Bow Lounge, which will be open all four nights of the tournament, will be limited to 250 people and cost $249.

A 72-hole, net stroke play tournament, the World Am will be played August 30 - September 3 on 55 of the Myrtle Beach area’s premier courses.

Entry into the tournament, which includes at least four rounds of golf, nightly admission to the World’s Largest 19th Hole and a gift bag, is $619 through July 8, a $60 savings off the regular cost. The registration deadline for this year’s event is August 5th.

“Based on early feedback, players love the concept and with short lines, premium drinks and a golf lesson, among many other perks, the Blade & Bow Lounge will make the 19th Hole experience even better,” Tournament Director Scott Tomasello said. “Blade & Bow, with its commitment to honoring history while producing one of America’s finest bourbons, is a perfect sponsor for the World Am and our VIP lounge.”

The Blade and Bow story began with the founding of the legendary Stitzel-Weller Distillery in 1935, a Louisville icon and home to the fathers of bourbon. With a commitment to craftsmanship and artistry, Stitzel-Weller reimagined what Kentucky Bourbon could be until distilling stopped in 1992.

Blade and Bow has opened the door to the next chapter of Stitzel-Weller’s renowned history.

Each variant offers a completely unique experience that pays homage to the storied distillery and welcomes a new generation to the art of bourbon making that was perfected.

While much of the 2021 World Am will look familiar to players, there will be two new women’s divisions this year. For the first time, there will be a women’s gross division, and the ladies, who previously had just one age group, will be split into two groups - 59 and under and 60 and older.

The World Am, which flights players based on age, gender and handicap, is open to all golfers 17 years of age and older.

After four days of competition, all flight winners and ties advance to the World Championship Playoff at the Resort Course at Grande Dunes, an 18-hole shootout that crowns the event’s winner.

While the competition is initially what lures players to the tournament, it’s only part of what keeps them coming back. At the heart of the World Am’s appeal is the camaraderie among its participants and much of that kinship is fostered at the World’s Largest 19th Hole.

The 19th Hole, which takes up all 120,000 square feet of the Myrtle Beach Convention Center is the heartbeat of the tournament, providing players free food and drink, live entertainment, a golf expo and more.

Each night of the event, the 19th Hole overtakes all 120,000-square feet of the Myrtle Beach Convention Center, providing participants with free food and drinks, live entertainment, celebrity guest appearances, a golf expo and more. Among the big names that have appeared at the 19th Hole in recent years are David Feherty, Brandel Chamblee, Charlie Rymer and John Daly.

Players will also receive a gift bag that includes a polo, a pullover, a golf towel, a logo’d hat, a PGA Tour Superstore gift card and an assortment of other goodies valued cumulatively at $250.