Two-time winner in 2018 will expand club usage with Exotics

(RELEASE) - Tour Edge announced today that Scott McCarron has officially signed a deal to play and endorse Tour Edge Exotics and to play their metalwoods on the PGA Tour Champions in 2019. McCarron will feature a Tour Edge Exotics logo on his left sleeve. 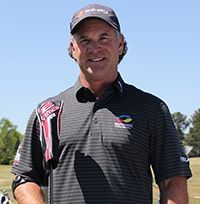 “I love the Exotics hybrid and what it has done for my game, it is a great fit and a low-spinning,  hot faced hybrid that has me hitting more hybrids off the tee and in general because I have complete faith in the club,” said McCarron. “I am also proud to add their logo to my gear as I love what Tour Edge is doing as a company.  They are a long-established U.S. owned and operated company that builds their premium clubs in the United States. I am looking forward to testing their Exotics drivers and fairway woods to find a home in my bag as well.”

McCarron finished 2nd in the final Charles Schwab Cup points and money standings in 2018 while playing both 17 and 19 degree Exotics CBX hybrids with a Fujikura Atmos shaft. The runner-up finish for the season was McCarron’s third-straight Top 5 Charles Schwab Cup finish (3rd/2017, 4th /2016).

"Scott McCarron is a world-class player and top contender on the PGA Tour Champions year in and year out,” said Tour Edge President David Glod. “His choice to represent Tour Edge and play our Exotics clubs truly validates how far we have come as a golf club manufacturer over the past 32 years. He is a perfect fit to represent our brand and the perfect ambassador for the PGA Tour Champions.”

McCarron won twice on the 2018 PGA Tour Champions with Tour Edge in his bag. He won the Shaw Charity Classic Sept. 2nd and the American Family Insurance Championship June 24th for his 8th win on the PGA Tour Champions over the last three seasons.

“The PGA Tour Champions is a tour that has made amazing strides the past few years,” said Glod. “It is more competitive than ever and is now one of the most exciting tours in golf to watch with ultra-competitive players like Scott leading the way. I like to tell people who still call it ‘the Senior Tour’ to follow Scotty for a couple of holes and see if the word ‘senior’ properly describes his tenacity and the power he unleashes on the golf course. He truly is a special talent.”

McCarron will be appearing for a meet-and-greet at the Tour Edge PGA Show booth from 11 AM to 12:30 PM on Thursday January 24th at Booth 843. Before that, he will make his season debut January 17th at the Mitsubishi Electric Championship at Hualalai.